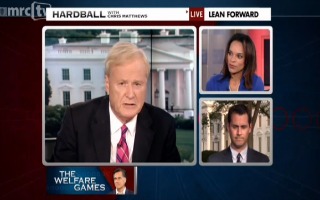 On Tuesday, MSNBC Host Chris Matthews took on claims made by the Mitt Romney campaign that President Barack Obama’s administration “announced a plan to gut welfare reform by dropping work requirements.” Aside from saying that the ad was factually inaccurate, he accused the Romney campaign of aggravating racial tensions by using code words. He said that a Romney campaign’s attack on Obama goes over the line by channeling images of “welfare queens and young bucks waiting in line with their food stamps to get vodka.”

Matthews assailed the attacks on the Obama administration’s amendments to the work requirements in the 1996 welfare reform law as being strikingly offensive and inaccurate. In attacking Romney’s claims as being racially coded, Matthews employed some not-so-coded language himself:

The pictures of the wholesome family there concerned about welfare cheating are white people. And the implication here is pretty clear that the people that are getting these welfare checks without working are not white people. This is the old stuff that Romney is resorting to here. It’s familiar territory. It’s Willie Horton’s stuff it’s the same old stuff Reagan used to engage in, talk about welfare queens and young bucks waiting in line with their food stamps to get vodka. I lived through all of that stuff. I know all the code. This is code.

The assertion by the Romney camp that the White House wants to “end work requirements” is a bit strong. However, the Department of Health and Human Services’ proposal to provide the states with the flexibility to redefine what they view as work are vague enough to be disconcerting for those who fear changes to the welfare reform compromise.

But the claim that attacks on any changes to welfare reform is based in racial animus is not Matthews’ invention. The charge was most recently leveled by Salon.com blogger Alex Seitz-Wald who noted that the Romney campaign highlighting alterations to welfare’s work requirements could not be divorced from race:

The debate over welfare and welfare reform has always been tied up in race, and a cynical observer might argue that Romney is picking up where former House Speaker Newt Gingrich left off in the ’90s and earlier this year when he repeatedly called Obama a “food stamp president.” As University of California Santa Cruz professor Michael K. Brown wrote in the 2003 collection “Race and the Politics of Welfare Reform,” “The 1996 welfare [reform] law is the culmination of conservatives’ success in manipulating the backlash to the Great Society’s centralization and expansion of social welfare during the 1960s, a campaign based on the political exploitation of vulnerability of poor African Americans, who became scapegoats for the ‘failures’ of the Great Society.” These are the infamous “welfare queens” of the Gingrich and Reagan-era.

The Obama campaign’s “Truth Team” promptly tweeted out the Salon article accusing the Romney campaign of subtly channeling racial antipathy in the electorate:

Of course, invoking coded racism to advance a political agenda is nothing new. During the debate over welfare reform in 1996, a Washington Post article by Sig Gissler asserted that race was a central issue in that year’s presidential election, but the debate was engaged “through code words such as ‘violent crime,’ ‘welfare reform’ or ‘illegal immigration.’”

Matthews’ assertion, that there is a barely perceptible racial implication in the attacks the Obama White House’s amendments to welfare reform’s work requirements, borders on the conspiratorial. Even while making the claim that there is an unspoken racial element to Romney’s charges, Seitz-Wald notes that more white Americans are on welfare than minorities. Matthews fails to make a similar caveat.

Matthews makes the claim that this, and myriad other attacks on President Barack Obama’s record, are coded so that only a closeted racist would be able to decipher the message. But, given the frequency with which Matthews levies this charge against Obama’s detractors, it is certainly accurate to say that Matthews has become quite adept at hearing and decoding these encrypted messages. Some might consider that a dubious distinction.

Watch clips of Matthews invoking race in the attacks on Obama below via MSNBC: