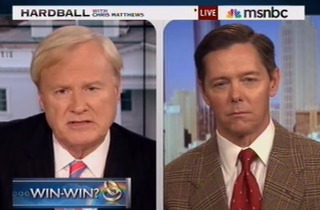 Ralph Reed, the founder of the Faith And Freedom Coalition, joined MSNBC host Chris Matthews on Tuesday to debate the merits of state-level bans on gay marriage. After debating the issue of same-sex marriage rights, both Reed and Matthews agreed that, whichever way the Supreme Court rules on the legality of gay marriage bans, the Court is unlikely to create a consensus and end the debate around the controversial practice.

Matthews said to Reid that he expects, at best, a narrow decision from the Supreme Court upholding the 9th Circuit Appeals Court’s decision to strike down the ban on gay marriage in California alone. “How will you react to that?” Matthews asked.

Reed said that such a ruling would be “profoundly disappointing.” He added that he believes Californian’s should not have their decisions undone by the courts.

Matthews asked Reed if he would lead a backlash against a decision by the Supreme Court if they were to declare California’s gay marriage ban discriminatory and illegal. Reed told Matthews that he would not personally lead a push back against the decision, but it was likely that one would materialize.

Reed said that the Supreme Court often gets into trouble when it “gets over its skis” and “progenitor of very significant social change rather than [allowing] it to take place incrementally and gradually.”

Matthews asked Reed if he thought Brown v. Board of Education was an important ruling that signified the beginning of the end of segregation in the South. “Don’t we need leadership from the top on occasion?” Matthews asked.

Reed replied that Brown v. Board of Education was not leading. That decision, he said, was following the 14th Amendment and finally creating a mechanism to enforce that Amendment.

“I think you make a good point,” Matthews said. “I do think it’s always better when the public will coincides with the right. But sometimes the public will is a little slow. But I agree with you on those cases.”

He added, however, that the Supreme Court does “have to get ahead” of the public will at times.