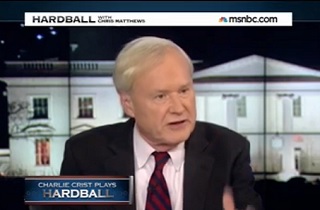 On Thursday night’s edition of Hardball, host Chris Matthews interviewed former Republican and former Florida Governor Charlie Crist, and the subject of access to the ballot box came up. Matthews complained about being called “anti-white” over his views and asked Crist “Why does your ex-party think the way to fight the demographic changes in this country is to screw the minorities?”

“I don’t like people getting screwed out of voting,” Matthews told Crist. “Somebody called me anti-white the other day for fighting all the time for minorities’ right to vote.”

He added that “You to have a fair playing field in politics, and everybody should get to vote. Why does your ex-party think the way to fight the demographic changes in this country is to screw the minorities? This is something you have seen in Florida. Rick Scott is right behind it.”

“Absolutely he is,” Crist, who holds a polling lead in his run against Scott for governor of Florida, replied, and noted that when he was governor, he signed an executive order extending early voting hours.

“Four years later, Rick Scott faces the same situation,” Crist said, recounting how he and Dan Gelber asked Scott to sign a similar order in 2012. “He wouldn’t do it.”

“You’re right,” Crist said, “you’re absolutely right.I mean, I’ve been in the discussions. I have seen it, and it’s appalling.”