Matthews Goes Birther On Ted Cruz: Will GOP ‘Attack Him As Some Sort Of Interloper?’
video

Matthews Goes Birther On Ted Cruz: Will GOP ‘Attack Him As Some Sort Of Interloper?’ 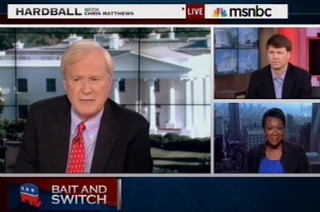 MSNBC host Chris Matthews identified what he characterized as a strain of hypocrisy within the Republican Party relating to “birtherism.” Matthews claimed the GOP regularly and erroneously charged President Barack Obama was ineligible to be President of the Untied States because he was born outside the country. Matthews wondered whether Republicans will prove themselves to be inconsistent if they do not level the same charge against Canadian-born Sen. Ted Cruz (R-TX).

RELATED: Chris Matthews Shut Down Amid Anti-Birtherism Tirade: ‘The Only Person Talking About That Is You’

“Will they then adopt the same approach they took to someone born overseas – they claimed, in the case of Obama – to someone who was actually born overseas, born in another country, that is Ted Cruz,” Matthews continued. “Will they attack him as some sort of interloper who’s not eligible to run for president?”

Reid replied that it was possible because the right began to disqualify Sen. Marco Rubio (R-FL) from the presidency when he “stepped out of line” on the issue of immigration reform.