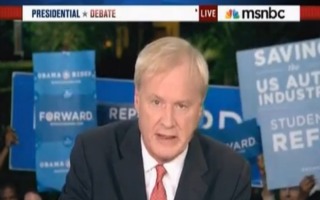 Following the conclusion of Monday night’s final presidential debate, MSNBC’s hosts noted that GOP presidential nominee Mitt Romney had distanced himself from his positions as a primary candidate. Chris Matthews called this a political calculation and said that the Republican party has a greater hatred of Barack Obama than they do of Al Qaeda.

“Mitt Romney committed to the idea, without clarification, that troops should be removed in 2014,” said Rachel Maddow referring to Afghanistan. She said Romney made significant news this morning when he reversed his position on the Afghan troop withdrawal. She said that on that issue, and a number of issues, Romney agreed with Romney more than she thought was likely.

Matthews, who opened by saying the debate focused “far too much on Israel,” said there were a number of threats to global security that went unaddressed.

“I thought Romney had a strategy tonight – avoid looking like a radical,” Matthews added. He said he thought Romney had good shots on the economy but he avoided linking himself to the positions he took as a candidate for the Republican presidential nomination.

“I thought it lacked any kind of originality and importance,” Matthews said of the debate. When Maddow noted that Romney had divorced himself from many positions he took in the primary, Matthews said that the Republican party has become married to the idea of recapturing the White House to the exclusion of many others.

“They hate Obama – they want him out of the White House more than they want to destroy Al Qaeda,” said Matthews. “Their number one enemy in the world right now – on the right – is their hatred, hatred for Obama.” He cited racism in the South against Obama which he claims is evident in recent polling data.