Matthews: GOP’s Changes to Obamacare for Debt Ceiling Increase ‘a Tough One’ for Obama

Matthews: GOP’s Changes to Obamacare for Debt Ceiling Increase ‘a Tough One’ for Obama 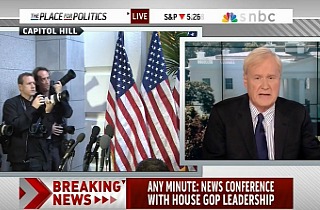 “This is a very tough one for the president,” said MSNBC host Chris Matthews on Tuesday morning after the deals of a House Republican proposal to reopen the government and raise the debt ceiling in exchange for some changes to the Affordable Care Act were leaked. Matthews said that the president would have a difficult decision to make in the coming hours.

MSNBC anchor Thomas Roberts asked Matthews to weigh in on the Republican proposal which would open the government and raise the debt ceiling in exchange for delaying Obamacare’s medical device tax, enforcing income verification provisions, and repealing subsides for members of Congress, President Barack Obama, his Cabinet, and the vice president.

“They don’t want to leave this fight without having scored a point against Obamacare,” Matthews observed. “I think that’s pretty clear right now.”

“If they can wound it this time, they’ll come back and get it in January and February again,” he added. “This is the way the president, I think, is looking at it – they came to get his baby, if you will. And they want to hurt it.”

“I think he has to make a big choice,” Matthews said of Obama. “He has to risk all the problems, the hell that’s coming Thursday after midnight if he wants to stand his ground. This is a very tough one.”