Matthews Guests: GOP Is The ‘Vessel Of The Resentful,’ Full Of ‘Nativist’ ‘Xenophobes’ 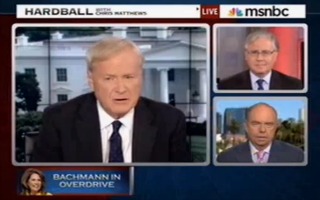 On Monday, MSNBC’s Chris Matthews hosted a panel discussion on the Republican members of Congress who have been vocally critical of Rep. Michele Bachmann (R-MN) for her citing a report that claimed members of the Muslim Brotherhood had infiltrated the U.S. government. Both Huffington Post editor Howard Fineman and Democratic consultant Bob Shrum agreed and said that Bachmann stoked fears among Republican party members who were “resentful” and “anxious” that the nation was gradually moving towards being majority non-white. Shrum warned that if Mitt Romney is victorious against President Barack Obama in November, “immigrant-bashing” and ‘Muslim-bashing” will continue unabated.

RELATED: Chris Matthews: Obama ‘Perfect’ Father, Husband, American — But ‘All They Do Is Trash The Guy’

Matthews first asked Shrum to weigh in on what he views as the Republican party’s “McCarthyism.”

“Michele Bachmann and the Intelligence Committee are an oxymoron,” said Shrum referring to Rep. Bachmann’s House Committee assignment. He said he was glad to see some Congressional Republicans calling out Bachmann for her insistence that Sec. Hillary Clinton aide Huma Abedin was linked to the Egyptian Muslim Brotherhood, but he wanted to see Romney do the same for critics of President Barack Obama.

Fineman took the criticism a step further. He slammed the campaign that Mitt Romney is running as appealing to the xenophobic and “nativist” base of the GOP.

“He is playing to, and has from the beginning of the campaign, playing to the kind of nativist base of the tea party,” said Fineman. “And by nativist, I mean people who are in essence afraid of the world.”

“The Republican party is going to cripple itself beyond recognition if they don’t quit being xenophobes,” Fineman continued.

Fineman, refining an argument advanced by Center for American Progress fellows Ruy Teixeira and John Halpin who famously linked demography to political destiny, said that the GOP is going to continually shrink until it cannot win an election.

Matthews said that the modern sitcom is cast with a variety of ethnicities. “That’s the face of America today, not the Republican party,” said Matthews. “Why don’t they admit what’s in front of everybody’s eyes?”

“The Republican party has become the vessel of the resentful, of the fearful, of the people who are anxious” said Shrum. “Michele Bachmann speaks for them, she spoke for them during the primaries – didn’t do very well – but Mitt Romney kowtows to them.”