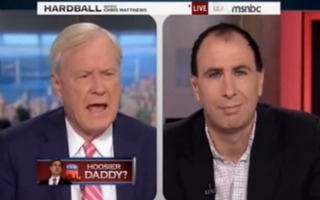 On Wednesday, New York Magazine columnist Jonathan Chait joined MSNBC’s Hardball host Chris Matthews to discuss the defeat of long-time Sen. Richard Lugar (R-IN) in a primary election. Matthews said that Republicans face an uphill battle in the next election, let alone the next Congress, because their party opposes “climate and science,” “revenues” and they are “anti-immigrant,” so Democrats will find them difficult to compromise with.

RELATED: Matthews On Obama’s Gay Marriage Statement: The ‘Wolves Coming Out,’ Will ‘Make It A Religious Issue’

Chait discussed Lugar’s concession speech, in which the Senator lamented the present lack of bipartisanship in Washington. Chait said that condition is likely to get worse. However, he said that President Obama has given Republicans most of what they have asked for, from free trade deals to entitlement reforms. “It’s a pretty asymmetric polarization,” said Chait.

Matthews went on to criticize Republicans on a number of fronts, and wondered where there was room to for Democrats to be able to reach legislative compromise with the present iteration of the GOP:

Republicans will not even admit science or climate. And they will never even talk revenues. They’re pretty much seen as anti-immigrant. So they’re not exactly ready to get together here.

“Part of the problem we have is that everyone that is concerned about this trend that’s been going on for twenty to thirty years, feels compelled themselves to establish their own bipartisan bona fides, so they have to say, ‘both parties always do it,’ when really it’s an asymmetric trend,” said Chait.

“What do the tea party voters expect to get done, Matthews asked. “I can understand the impulse to vote tea party because you’re just angry at everything – and you want to vote no, no, no.” He went further, saying that Democrats will not be able to legislate with a Republican representative that refuses to compromise.

“I have a very simple rule,” Matthews concluded. “If you lose an election, you recognize that the other guy won it. You cut the next deal in their favor, but you cut the deal.” He cited how President Ronald Reagan and former House Speaker Tip O’Neill (D-MA) managed to achieve legislative compromise.