Matthews Insists ‘Obamacare’ Will Be ‘Popular’ With ‘Working People’ … Except Unions?
video

Matthews Insists ‘Obamacare’ Will Be ‘Popular’ With ‘Working People’ … Except Unions? 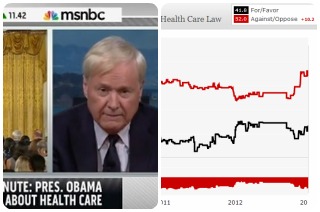 Moments before President Barack Obama took the stage in the White House to once again tout the benefits of his signature health care law, which has been faltering as states and agencies struggle to implement its many sweeping reforms, MSNBC host Chris Matthews attempted to explain why he thinks the Affordable Care Act will achieve historic vindication. “This is not a program for the poor,” he said. “It’s for the working people. It’s popular.” The MSNBC host has apparently been too busy to read the statements of labor union leaders who have come out against the law this week in the strongest of terms.

“They are trying to stop this from landing,” Matthews said of the Republicans seeking to delay the implementation of the ACA. “They are afraid once the health care law gets on the beach they can’t stop it.”

“If they were truly confident, optimistic this plan would be unpopular they wouldn’t be raising hell right now,” Matthews inexplicably began. “They’d be letting it take effect and then raising hell.”

“This is not a program for the poor,” he continued. “It’s for the working people. It is going to be popular. That’s the biggest Republican fear — they will not only have lost legislatively, they will once again have lost historically. And that’s their biggest fear and that’s why they are yelping.”

He joins a variety of MSNBC hosts who have disingenuously suggested that opposition to the ACA is a partisan phenomenon. That is simply not the case.

By a vote of 264-161, the House voted yesterday to delay by one year the employer mandate to cover health insurance for its employees – a move some believe was required to make the White House’s unilateral declaration that the employer mandate should be delayed to 2015 legal. With 22 Democrats joining the GOP, the House also voted to delay the individual mandate to purchase insurance or face a penalty by 251-174.

The House, as that chamber so often does, was merely making manifest the will of the people. Contrary to expressions of faith from supporters of the ACA prior to and immediately following its passage in 2010, the law has not grown more popular with age. 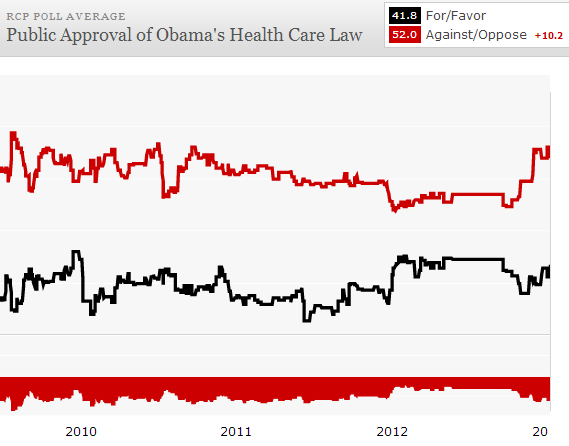 The Real Clear Politics average of polls show that “Obamacare” enjoys a favorability rating of just 41.8 percent. In the three polls from as many firms taken over the past four weeks, the Affordable Care Act nets between a -5 percent and a -15 percent approval rating.

A Gallup poll taken from June 20-24 of 2,048 adults showed that a majority of Republicans and Independents, as well as a full fifth of Democrats, currently disapprove of the law. 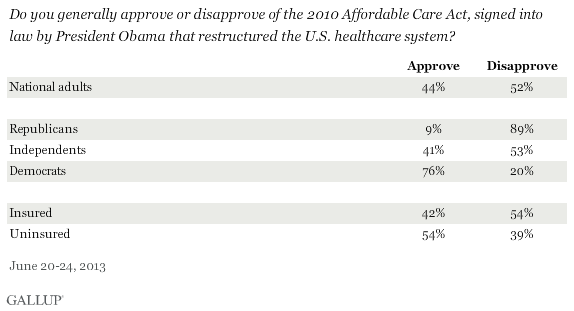 But the hope, and it is a hope, that Matthews expressed on Thursday relating to the ACA – that it is a law for “workers” – is betrayed by the fact that the representatives of “workers,” the heads of labor unions, are no longer supportive of the ACA either.

In the letter, the labor leaders said that the ACA as constructed will “destroy the foundation of the 40 hour work week that is the backbone of the American middle class.”

Furthermore, the law will also “destroy the very health and wellbeing of our members along with millions of other hardworking Americans.”

Analysts have noted that the ACA is likely to reduce incentives for workers to join unions, prompting the outcry from labor leaders dependent on their members’ dues. Nevertheless, this development clearly makes one question just what “workers” Matthews was referring to when insisted that that the law was destined to become popular.