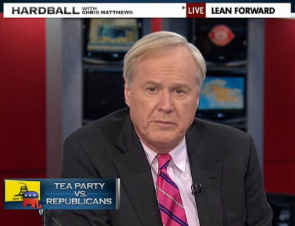 In a discussion regarding the Tea Party’s lingering influence over the Republican party, and more specifically, their ability to scare current Republican senators with the threat of a primary challenge, Chris Matthews suggested the Tea Party is acting in a role similar to the Muslim Brotherhood. Although the comparison alone is controversial and is already angering some on the right, it seems Matthews may have actually been trying to pay the Tea Party a compliment?

So the Muslim Brotherhood has a parallel role here with the Tea Party, they’re the ones who keep you honest and decide whether you’ve stayed too long? Whether you’ve got a “Sell By” date looming?

If that was the only statement Matthews made regarding the Tea Party then arguably it could be viewed as him praising their ability to impact change and hold their leaders accountable. Just like the Muslim Brotherhood helped bring about regime change in Egypt, so too has the Tea Party been instrumental in changing the make-up of the Republican party. However, where there is much less room for interpretation is with Matthews’ next, more straight-forward comment regarding the Tea Party:

There’s some craziness out there on the right and the fact that these war-hooping nut bags, some of them, are deciding who the senators should be, should make the Democrats . . . feel pretty happy.

Given that Matthews also seemed to suggest that having a Republican viewpoint is “trying to defend the indefensible,” it seems one might be better off just allowing Matthews’ comments to speak for themselves today.