Matthews: No American Pope Because Americans Are Most Sensitive ‘To The Hell’ Of Abusive Priests
video

Matthews: No American Pope Because Americans Are Most Sensitive ‘To The Hell’ Of Abusive Priests 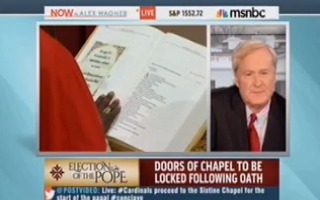 MSNBC host Chris Matthews joined Alex Wagner on Tuesday where he blasted the Catholic Church’s behavior towards priests who are found to be sexual abusers. Matthews insisted that, in spite of the fact that the Vatican is rumored to be considering two American cardinals to succeed Pope Benedict XVI, they would never select an American to be the next Pope because Americans are the most sensitive to “the hell that’s been broken loose” by abusive priests.

RELATED: Matthews Hopes New Pope Reforms Church: ‘We Got Meat On Fridays, We Would Have Rather Had Birth Control’

“We have another Boston/New York rivalry,” said Alex Wagner of the two American cardinals in consideration to become the next Pope. “In this horse race, Chris, where to you pin the likelihood of the world getting an American Pope?”

“Well, not likely,” Matthews replied. He said that Americans and Irish are the “most sensitive to the hell that’s been broken loose in recent decades in the Catholic Church with this exploitation of altar boys.”

“Either change the rules officially or enforce the damn things,” Matthews concluded. He said that Americans believe that there is “widespread” abuse and an institutional proclivity to cover up that abuse in the church.