Matthews: Obama In Trouble, Not Because Of Scandals, But Because He Doesn’t ‘Play Offense’
video

Matthews: Obama In Trouble, Not Because Of Scandals, But Because He Doesn’t ‘Play Offense’ 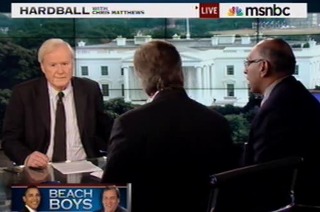 MSNBC host Chris Matthews severely chastised President Barack Obama’s handling of the media environment in the past several weeks since a variety of scandals have engulfed his administration. Matthews scolded Obama for spending too much of his time “playing defense” and not focusing on changing the national conversation by concentrating his attention on a “jobs bill” centered on promoting construction and infrastructure.

“You know, the reason he’s been in trouble the last four or five weeks, these kerfuffles – they’re bad, but they’re not awful,” Matthews began. “He’s been in trouble because it’s very hard to play defense all the time. You’ve got to play offense.”

Matthews said that Obama should be spending more time walking the halls of Congress and pressing members to support a jobs bill. “Democrats who aren’t for jobs are not Democrats,” he declared. “If the engine is dead in the boat, you’re going to drift.”

“Tell me why he’s not for a jobs bill,” Matthews asked Democratic strategist Steve McMahon. “It’s a simple thing.”

RELATED: Chris Matthews Says 10 Or 20% Of Obama Opposition Rooted In ‘Sense That The White Race Must Rule’

“You’ve got all these unemployed engineers out there and all these people,” Matthews added. “Just make a list of everybody unemployed right now and think of a job for them to do.”

McMahon insisted that Obama supports a jobs plan but has met with intractable Republican resistance which has scuttled the plan. Matthews dismissed this claim. “What committee is it in? When are they going to report it out? No,” Matthews concluded.