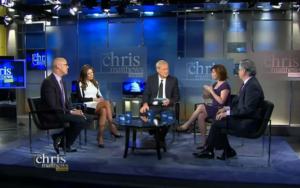 On Sunday, Chris Matthews‘ panel took a look ahead at the first presidential debate, discussing what both candidates need to do. While they found Mitt Romney has several points to work on, several also noted that debates aren’t quite a piece of cake for President Obama either.

First on the list: get likable. The Romney team knows debates are won or lost “on big moments,” John Heilemann said. And the risk, he said, is that Romney may try too hard to get that moment.

NBC’s Kelly O’Donnell noted that the campaign knows this is the biggest audience he’s had yet, and thus will approach it as an opportunity to counter some of the image that’s been created by others. But, Matthews then questioned, how can he be both aggressive and likable?

Howard Fineman offered an answer. He has to be the “skilled, deft, humorous, focused, visionary and specific candidate that he’s not so far been.” Er, simple. “Sometimes I think he’s in the wrong line of work altogether,” he said. “However, Mitt Romney is a winner and a fighter — and he likes to win the deal and close the deal.”

As for Obama? He has to avoid the “kind of condescension” we saw in the 2008 debate against Hillary Clinton, when, in response to Clinton’s comment about Obama being so likable, he curtly replied, “You’re likable enough, Hillary.”

“It came off as the essence of arrogant condescension,” Fineman said. “That’s the sliver of Barack Obama’s character that he can’t afford to show if pressured properly by Mitt Romney.”

Everyone basically knows that’s Obama isn’t a very good debater, Heilemann added. “He doesn’t like to be challenged,” Fineman chimed in.

But back to Romney. Another one of this problems is his lack of specifics. The panel agreed all round: He needs specifics about his economic plan.