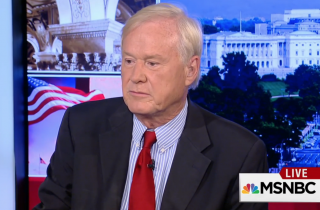 Chris Matthews recently declared he would end MSNBC show’s longest-running program — Hardball— if Hillary Clinton dropped out of the race. Some had a good laugh about it while joking that it was the best 2-for-1 deal that’s been presented in a long time.

There’s a reason why the 69-year-old has enjoyed such staying power at MSNBC: His genuine, unbridled passion for all-things-politics. He’s just a guy who truly doesn’t see his job as a job at all. As Dick Vitale once said, “I can’t believe they’re paying me all this money to do something I love.” And there was a time early in his career when Matthews — who once worked for the Carter administration as a speechwriter — was a relatively fair host when analyzing stories and interviewing guests (particularly on his now-cancelled Sunday morning NBC panel program, The Chris Matthews Show).

But that’s all changed now, as Chris is nothing more than a one-trick pony who sees everything through the prism of race. If he were consistent across both major parties, perhaps that would be one thing. But Matthews only applies the race card to Republicans, which plays well with his equally-myopic (and small) audience. It doesn’t, however, help broaden his viewership and turns off those with some sanity and a brain, which may explain why he’s been getting his doors blown off by Fox’s Greta Van Susteren and CNN’s Erin Burnett (or her replacement while on maternity leave) on a nightly basis. In the end, it really is a shame to see a once-respected political voice be reduced to a punchline…because that’s exactly what Matthews has become.

Exhibit A for this week happened on Friday night during Hardball’s coverage of Donald Trump’s campaign rally in Mobile, Alabama. Per CNN and the City of Mobile, 30,000 people showed up (Rachel Maddow later crowed the number was only 20,000, which she obviously had first-hand knowledge of from her Manhattan studio 1,000 miles away). Anyway, as Hardball previewed the event, Matthews had this exchange with NBC reporter Katy Tur, which basically tells you everything wrong with media today:

CHRIS MATTHEWS: Are there any black people there?

TUR: I have not seen any today that have come out for Donald Trump. I spoke — I spoke with a lot of people at lunch today — and they were all, to be blunt, Caucasian white people who expressed support. The others did not… [They are] normal looking people, who have normal looking opinions on things.

It would be interesting to hear what a “normal-looking” opinion sounds like. But to the greater point, why would Matthews even broach a question like that? And if he’s going to go there, where is that very same question around a Bernie Sanders rally, which are also overwhelmingly white? Or a Hillary Clinton rally? A John Kasich rally? A Ted Cruz rally? Why is race a focus here and not for any of those candidates regardless of party? Because all of the aforementioned candidates have town halls and rallies that are almost-exclusively attended by, to use Ms. Tur’s words, “Caucasian white people” (even Kasich, who won 26 percent of the black vote in Ohio last year, which, in context, is 20 points higher than what Mitt Romney received nationally in 2012).

The whole race thing harkens back to the same game former (and perhaps future) MSNBCer Keith Olbermann and Matthews played when the Tea Party rose to power in 2010. It was Olbermann who first decided to point out that Tea Party rallies were only attended by white people, which obviously—in his mind—made the group the 21st-Century version of the KKK. Night after night, it was the same theme, with Matthews hitting for the race-card cycle by comparing the GOP to the KKK, Nazis, Storm Troopers while acting like the party “base is wearing sheets”. MSNBC’s Joy Reid played the race card from the bottom of the deck this morning in her astute analysis of Trump’s popularity as well, so it appears the new playbook on Trump is out: Nothing else appears to stick to Teflon Don(ald), so let’s go with the tried and true formula that helped make us so unpopular as a network lately.

As for Matthews, it’s clear he’s attmepting to associate Trump with the tea party by using the same tired race tactic, which is rich when considering the GOP frontrunner’s platform isn’t quite in line with that of said party. Here’s what fiscally-conservative stalwarts Club For Growth had to say about Trump recently:

The Club for Growth has issued very substantive and detailed white papers on the records of the major announced Republican candidates for president. There is no need to do a white paper on Donald Trump. He is not a serious Republican candidate, and many of his positions make him better suited to take on Hillary Clinton in the Democratic primary. It would also be unfortunate if he takes away a spot at even one Republican debate.

To Matthews, implying a GOP candidate is racist or attracts only those who hate black people — even a New Yorker like Trump — is just another day at the office. And when Chris takes off his mic and calls it a night, he retires back to his home in Chevy Chase, Maryland… where the average home costs more than seven figures and the total black population is exactly one percent.

Do those facts alone make him racist or (at least) someone only comfortable around white people? Of course not. But if Chris Matthews the host were analyzing himself from the outside in, Chevy Chase’s demographics and per capita most certainly would come up.

If that ends up happening and he keeps his word, MSNBC and the country would probably be better for it. Much, much better.

Watch the exchange again, below via MSNBC: