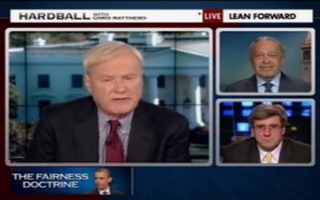 On Tuesday, Chris Matthews hosted former Clinton administration Labor Secretary Robert Reich and Wall Street Journal economic columnist Steve Moore in a segment which quickly descended into a debate over the value of entitlement reform and the political good will that President Obama is hoping to tap in the electorate by advocating for higher taxes on the wealthy.

Matthews first asked Reich if he thought Obama’s support for the “Buffet Rule” was a winning issue. “It’s going to be a winning issue, Chris,” said Reich. “We’re going to see the most populist campaign the Democrats have waged since the last three weeks of [former Vice President] Al Gore’s 2000 campaign.”

Reich went on to say that Mitt Romney made a big mistake by offering an endorsement of Rep. Paul Ryan’s (R-WI) budget proposal that cuts and reforms entitlement programs like Medicare and Medicaid. He also referenced Obama’s speech in Osawatomie, Kansas, in December, 2011 which mirrored a similar speech delivered by Teddy Roosevelt in which he called for a “New Nationalism.” “He used the word fairness then, in December, 15 times. We’re going to have at least 15 ‘fairnesses’ per speech from now on,” said Reich.

“My thought is that you’re right, that this presidential election is going to be about two themes: Democrats talking about – what Bob Reich was just talking about – fairness, fairness, fairness,” said Moore. “For Republicans to defeat that message and for Mitt Romney to win this race, he has to use the word that neither you, nor Robert Reich nor Barack Obama has been using at all lately and that is ‘growth and prosperity.’”

Matthews and Moore proceeded to debate the merits of President George W. Bush’s 2001 and 2003 tax cuts and their effect on the economy. Matthews contended that they were the “road to doom” and Reich said that the tax cuts lead to median wages dropping while Moore claimed that they led to a boom in 2004-2005.

Moore attempted to shift the debate to the corporate tax cut when he said that the U.S. became the nation with the highest corporate tax rate in the industrialized world. Matthews interrupted Moore, saying “you’re talking down America.”

Matthews played a clip of Paul Ryan on MSNBC’s Morning Joe from Tuesday and asked Moore to weigh in on Ryan’s proposed budget reform plan. Moore responded to Matthews by saying that he has been a long-time advocate of the flat tax and just wants “America to have a fair advantage in the global markets.”

Reich reentered the debate, saying that Republicans conveniently forget that for decades after the Second World War, the top marginal tax rate was 70 percent and it was accompanied by significant and sustained economic growth. “History is on the side of Barack Obama and those who say that the rich should pay their fair share,” said Reich. “That kind of fairness is completely compatible with economic growth.”