Matthews: Romney A ‘Useful Tool’ That Is ‘Not All That Interested In The World’
video

Matthews: Romney A ‘Useful Tool’ That Is ‘Not All That Interested In The World’ 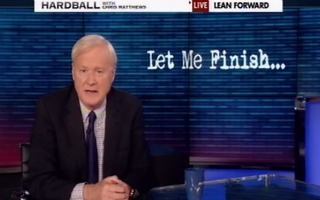 On Wednesday, MSNBC’s host of Hardball, Chris Matthews, delved into why he believes the prospect of Mitt Romney as president is something to “fear,” because he believes the former Massachusetts governor is not all that interested in politics or the issues that motivate political commentators. Matthews says that he doubts that if Romney were not running for President that he would be consuming political debate by “watching this network at night.” Furthermore, Matthews says that Romney is a “useful tool” for Republican opinion leaders like Americans for Tax Reform President Grover Norquist or Weekly Standard editor Bill Kristol.

Matthews began his closing monologue on Wednesday’s Hardball by asking if anyone knew who the real Mitt Romney is:

The host went on to list those subjects that he believes Romney is not particularly motivated by:

Matthews then said that if Romney were not running for president, it is doubtful that he would be consuming political media in the way he may be now:

Does anyone think he’d be watching this network at night, or Fox, or CNN or anywhere that politics is being discussed? Would he be reading the columns where the debate is occurring? I doubt it. He’s interested right now simply because he’s running right now, for president.

Matthews concluded by saying that Romney’s election was a prospect to “fear” because the former governor is a “usefully tool” for Norquist and Kristol who will “shape him to their needs and ideologies” after his inauguration:

This is precisely why he makes such a handy tool for the Grover Norquists and the Bill Kristols of the world. They’ve got purposes: Grover in tax cutting, Bill in an aggressive foreign policy. And they can use Romney to get what – well, what they’ve never gotten from Barack Obama – a useful tool. And this is the giant reason to fear Romney’s election. Not that the may turn right on his own, but that he doesn’t care about any of the issues of government, here in America or America’s place in the world as much as the guys who do care very much. And who will push him and shape him to their needs and ideologies once he is in power.