Matthews: Romney ‘Going To The Lowest Level Of American Politics’ With Trump Appearance 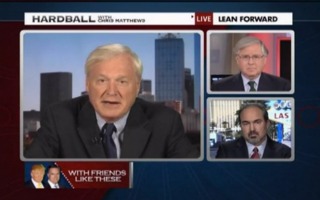 MSNBC anchor Chris Matthews opened his program Tuesday by recapping the statements that Donald Trump has made to the press ahead of a fundraiser he is holding with Republican presidential candidate Mitt Romney in which he maintains that he still has questions about the validity of President Barack Obama’s birth certificate. Matthews asked “is there any level to which Mitt Romney will not descend,” in order to defeat President Obama in the fall.

Matthews opened his segment by addressing Romney’s fundraiser on Tuesday night with Trump. Matthews asked rhetorically, “is there any level to which Mitt Romney will not descend?”

Any level he will not take himself to in order to scrounge for, as he puts it, the 51—or the 50.1 percent of the vote he needs to win? And the answer is, just watch. He went down for Grover Norquist on tax policy. Down to the always-gotta-have-a-war crowd on foreign policy. Down to the religious right on their we-know-best to do list. And now he’s going to the lowest level of American politics; the crud at the very bottom: nativism. Know-nothingism. I’m talking about the scum of “birtherism,” and it’s Grand Poobah himself. Tonight, we talk about Mitt Romney’s latest evidence that Mr. 1 percent will do anything, promise anything to beat 50 percent.

Matthews played a clip of conservative columnist George Will on ABC’s This Week calling Trump a “bloviating ignoramus” and Trump’s interviews today on CNBC and CNN with Wolf Blitzer where he doubled down on his embrace of questions about the authenticity of President Barack Obama’s birth certificate.

Matthews asked Huffington Post political editor Howard Fineman for his impressions on Trump’s interviews. “Romney is in bed with this guy,” said Matthews. “Why is Romney pulling up the covers over him and Donald Trump?”

“I’m less interested in what Donald Trump says than what Mitt Romney doesn’t say – or, for that matter, John McCain doesn’t say,” said Fineman. He said he has asked for comment from Romney and McCain’s offices for their official impression on Trump’s “birtherism.” Fineman said he received “silence.”

I think the silence from both Romney camp and McCain camp means the following: they’re willing to let Donald Trump root around in this and say whatever he wants to bring this topic up or keep the topic alive for those voters who are going to care about it. And they exist. They still exist in places around the country and in swing states like Virginia, like North Carolina, like Southern Ohio. I know those people –I went to the early tea party rallies in 2009 in my second home state of Kentucky. And for some of those people, this still matters. That’s who Donald Trump is speaking to.

Fineman noted that the last time Romney said explicitly that Obama was born in the United States was in April of last year. “He hasn’t said it since,” said Fineman. “They’re letting Trump go out there and raise this as much as he, Trump, wants.”