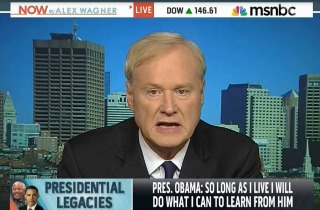 Fresh off his interview with President Barack Obama, MSNBC host Chris Matthews appeared on Now with Alex Wagner to review what the president said and to express his thoughts on the passing of former South African President Nelson Mandela. Matthews linked the GOP to South Africa’s white apartheid advocates and declared that those who facilitated the transition to Mandela’s presidency were more patriotic and had greater regard for their country than the Republicans in Congress.

Matthews acknowledged a point that Rev. Al Sharpton had made earlier in this broadcast where he noted that the last apartheid president, F.W. de Klerk, recognized after Mandela’s release from prison that he would be ascendant and brought him into his government to facilitate that transition.

“I haven’t heard anything as smart as what I heard Reverend Sharpton say a moment go in five years,” Matthews said. “The difference between the way F.W. de Klerk handled the need for change and the election – democratic election of Nelson Mandela – legitimate election, he was never truly elected – for him to recognize his role in history which was to be a patriot at that point is so different than the way [Senate Minority Leader] Mitch McConnell handled the election of Obama.”

“They were willing, the McConnell people onto the far right, were willing to destroy the country in order to destroy Obama,” Matthews insisted. “Whereas, to succeed in a country he loved, F.W. de Klerk was willing to see it transformed to black rule so it could be done successfully so he could have his country have a better future.”

“The loss of Mandela and what his history is about and the key statement of why this has been so poisonous the last five years,” he concluded. “We have real people in this country with real power and status who have used that status of power to hurt the country so they could hurt the president.”

“That’s the most damming assessment I’ve heard and, I think, the truest,” Matthews lamented.