Max Kellerman On CNN: “If You Eat Pork,” Don’t Complain About Michael Vick 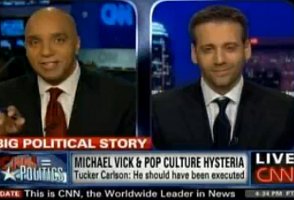 Philadelphia Eagles quarterback Michael Vick continued his unlikely dominance of this week’s news cycle today, when TV pundits still found themselves with nothing better to talk about. The latest of those pundits to be brought on the air, faced with the unenviable task (especially when you don’t get enough time to do it) of voicing an opinion on this story that hasn’t been heard already: CNN’s Max Kellerman, who went on the network today to vehemently disagree with his friend Tucker Carlson’s now-infamous position on Vick…and advocate for pigs.

After saying he “would have crushed” Carlson in a debate on Vick back in the days when both worked on MSNBC (without mentioning MSNBC by name, of course), Kellerman (who also works as a sports commentator, hence being selected to comment on this “issue”) took a provocative stance on killing dogs vis-a-vis killing pigs:

“People like Tucker have this kind of an emotional reaction to harming dogs specifically because dogs were engineered for companionship – mainly because they didn’t grow large enough to be a cheap source of protein, and they don’t taste very good to us…pigs, on the other hand, do grow very large, do taste good to us, and therefore are a great cheap source of protein.”

Kellerman allowed that Vick “committed a moral crime in addition to a legal crime,” but that “not nearly as many as you think” have “moral standing to point the finger at Vick.” Among those who don’t: you guessed it – those who consume pork, because they are on the “demand side” of an industry that “breeds, tortures and slaughters millions of higher life forms than dogs.”

Vick, Kellerman said, was on the “demand side” of such an industry – except, of course, that dogs are “lower life forms.” While calling pigs as a whole “higher life forms” than dogs as a whole seems an awfully broad statement (as does saying dogs, as a whole, “didn’t grow large enough to be a cheap source of protein”), he’s probably on to something in that if more meat eaters carefully considered what happens to the animals they eat…well, we might have less meat eaters.

Kellerman also dismissed the idea that it’s not a good thing for Vick to get a second chance simply because of the skills he possesses, saying that “it’s probably good” for people to see a high-profile person like Vick get another chance, and (thus far) make good. We’ll hand it to Kellerman – he made some bold, bold statements, but at this point, that’s probably what one has to do to make the Michael Vick saga the least bit interesting. Video of the clip, via CNN, below.