Mayor Cory Booker: Biden Is A Victim Of Media’s Obsession With Sound Bites 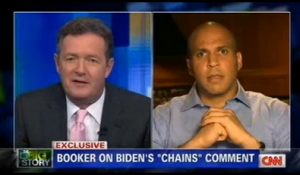 On Wednesday night’s program, CNN host Piers Morgan spoke with Newark mayor Cory Booker about a number of topics, including his thoughts on vice president Joe Biden‘s recent comments about the GOP and Wall Street placing “y’all back in chains.”

“Now, be honest, Mr. Mayor,” said Morgan. “Did you slightly recoil when you heard that phrase alluding to chains? I mean, there was a large number of black African-Americans in the audience who many people say this was a deliberate attempt to try to bring a slight racial tone to the whole proceedings, which was a bit unfair. What did you think?”

Morgan then mentioned the recent pro-Obama Super PAC linking Romney to a woman’s death from cancer, calling it “one of the most obscene things I’ve seen” and asking Booker, “Does your anger extend to that kind of stuff?”

Booker said he’s “clear on the record” about his thoughts on Super PAC’s influence on both sides, adding that “I believe when you hold substance of Obama against the substance of Romney, that the American public will choose Obama every time.”