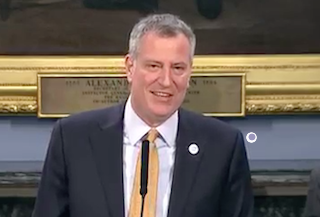 Los Angeles Mayor Eric Garcetti may want CBS’ Late Show to move to his city after David Letterman retires next year, but his New York City counterpart is not going to lay down without a fight. As Mayor Bill de Blasio revealed during a press conference Tuesday, he put in a personal call to CBS head Les Moonves, urging him to keep the late night franchise in New York.

“I had a very good conversation yesterday with the man who will actually make that decision, Les Moonves, and I emphasized that New York has been an extraordinary home for the Late Show and that we think it’ll be a great home for the Late Show going forward,” de Blasio said in response to a reporter’s question about the possibility of a move for the show. “And I’m hopeful that that’s what will come to pass,” he told reporters at an unrelated press conference this afternoon.”

“I think we have so much to offer,” the mayor continued. “And the proof is in the pudding. Obviously, David Letterman made rich use of his surrounding environment of New York City, and I hope that his successor will do the same.”

This year saw the move of NBC’s Tonight Show from LA back to its original home in New York City with Jimmy Fallon and producer Lorne Michaels took over. Especially if Letterman’s Worldwide Pants production company ends its involvement with the 11:35pm time slot on CBS, it is conceivable that the show would make the reverse move to the west coast.