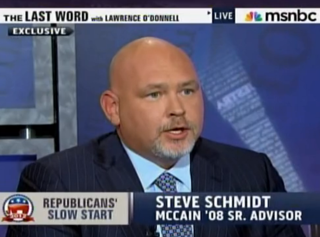 For many who follow political media, the current Republican presidential landscape is somewhat of a dream: you’ve got Donald Trump sending “investigators” to Hawaii on one hand, Rep. Ron Paul shouting about heroin on the other, the perennial threat of Sarah Palin and a man best known for his delicious pizza. But this campaign doesn’t seem as fun to actual Republicans, as former McCain adviser Steve Schmidt explained to Lawrence O’Donnell tonight.

Schmidt, who had taken about a year-long hiatus from television before tonight, began his evaluation with the news that Newt Gingrich is soon expected to officially drop his hat in the ring, but quickly widened his scope to the unpredictability of Palin and the field as it already stands today. He didn’t express much enthusiasm. “The field is… driving demand for other candidates to get into the race,” he noted, and expected to see candidates hopping in all the way up to the fall. The reasoning? “You need a lot less money to win the Republican nomination” given social media, which means more serious candidates can take their time until the sideshows fizzle out. And Schmidt is really hoping the sideshows fizzle out soon, particularly Trump.

The problem with the current field, Schmidt argued, is that serious candidates like Tim Pawlenty (who O’Donnell picks as the eventual nominee in the field by process of elimination) are being overshadowed by more entertaining candidates “spouting this mosaic of nonsense” that trivializes the issues that make the “somewhat compelling candidates” better known. Ultimately, he concluded, the louder but less promising character chatter “denies Republicans the ability to communicate.” O’Donnell agreed, but, having a horse in the race, requested Schmidt keep his “wisdom” to himself– or at least “on MSNBC, where none of the Republicans will hear it.”