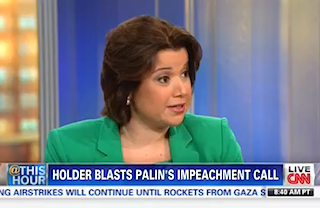 Over the weekend, Attorney General Eric Holder weighed in on Sarah Palin’s calls to impeach President Barack Obama, saying, “She wasn’t a particularly good Vice Presidential candidate, she’s an even worse judge of who ought to be impeached and why.” But when CNN asked one adviser to the 2008 McCain/Palin ticket to react, she simply replied, “Who cares?”

CNN political commentator Maria Cardona spoke first on the issue, giving a serious answer about Republicans’ efforts to distance themselves from Palin, but when it was Ana Navarro’s turn, she was incredulous about the whole thing.

“I think it’s unseemly for the attorney general of the United States to be responding this way to a Fox commentator, and I think she’s the host of an outdoors show or hunting show or something,” Navarro, who served as a Latino outreach surrogate on the McCain/Palin campaign, said. “I mean, the right answer is ‘who cares?’ She’s not in a position to make it happen. She’s not in a policy making position. Nobody in leadership, nobody in a role of responsibility in the Republican Party, nobody with the actual ability to make impeachment happen has said anything about impeachment, so really, who cares?”

“It would be like if I said, ‘you know what, I don’t like kale. I think we should impeach kale,'” she continued, before adding that she particularly hates it in juice form. “Who cares?”

But, as host John Berman pointed out about Palin, “She’s very popular. She campaigns and she wins votes for many candidates around the country.”