McCain Blasts Obama For ‘Fun’ And ‘Jokes’ In Press Conference, Wanting To Go Over Cliff For ‘Political Benefit’ 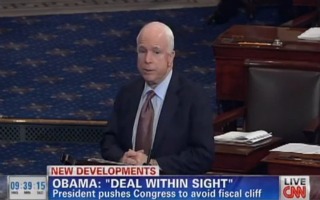 Minutes after President Barack Obama left a stage flanked by supporters where he implored Congressional Republicans to support a tentative deal to avoid going over the fiscal cliff, Sen. John McCain (R-AZ) took to the floor of the Senate to accuse the president of “antagonizing” Republicans. He said that, based on the president’s casual press conference, he and the American people have to wonder whether Obama believes it is in his interest to go over the cliff.

In his speech to his fellow colleagues in the Senate on Monday, McCain did not express any faith that Obama’s press conference had moved the ball forward on negotiations to resolve the fiscal cliff.

“What did the President of the United States just do,” McCain asked. “Well, he kind of made fun – he made a couple of jokes. Laughed about how people are going to be here for New Years. Sent a message of confrontation to the Republicans; I believe he said, ‘if they think they’re going to do that, they’ve got another thought coming.’