McCain Calls for Debate Over Cruz’s Control of GOP: ‘I Guess We Could Go Lower in the Polls…’
VIDEO

McCain Calls for Debate Over Cruz’s Control of GOP: ‘I Guess We Could Go Lower in the Polls…’ 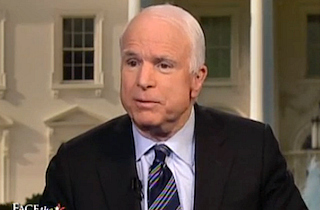 On Face the Nation Sunday morning, host Bob Schieffer asked Senator John McCain (R-AZ) how freshman Senator Ted Cruz (R-TX) was able to gain so much control over the GOP, to the point of guiding the party’s tactics concerning the government shutdown.

“How is it that a freshman senator, less than a year in office, was able to lead your party into what some in your party are calling a box canyon?” Schieffer asked.

“I think it was the extreme dissatisfaction that many people feel. There was already fertile ground because of those many members of the House who were elected in 2010 on the promise that they would repeal and replace Obamacare,” McCain responded. “The irony of all this is the rollout is a fiasco. That’s what should be on the front page.”

“I respect Senator Cruz,” McCain continued. “He didn’t make any bones about what he was going to do when he came to Washington. The question is should we follow that leadership, or should we go in other directions, and coalesce the majority of American people. I guess we could go lower in the polls. We’re down to blood relatives and paid staffers…What we need to do is have this debate within the Republican Party. And it’s gonna be a serious debate.”