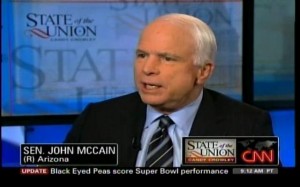 This should really be titled “Don’t Ask McCain Anything, Don’t Tell Him He’s Irrelevant.”  John McCain’s stand on Don’t Ask, Don’t Tell changes too frequently to document although both Rachel Maddow and Jon Stewart have tried in the past.  Many seem sick of hearing about Sarah Palin in the news lately, and McCain’s position of the week on this issue is just as tiresome.  Palin and McCain are continually able to grab headlines though, no matter how trivial their statements are, precisely because a listless President Obama has left the media spotlight open for the taking.

Apparently McCain now thinks the current military system in place works, telling CNN’s Candy Crowley on State of the Union “I understand the point of view by the majority of the media, but the fact is [repeal of Don’t Ask, Don’t Tell] was a political promise made by an inexperienced president or candidate for president of the United States.”  Well that charge came out of nowhere, but at least it is easier to comprehend than McCain’s past verbal gymnastics of debating with himself whether military leaders or the actual troops had more credibility to determine whether repeal should take place.  McCain also continually stressed the “all-volunteer” nature of our forces, which hopefully was not a hint that if gays in the military do not like the current policy they should quit, and instead was a concern that repealing the policy might result in other members of the military quitting.

While the issue of repealing Don’t Ask, Don’t Tell is certainly open to debate, especially since changing policy in the midst of two wars might not be an effective strategy, the time for that debate should by now have come and gone, since military leaders have now commented and studies are ready to be presented to Congress this week.  Therefore, now the Commander-in-Chief should be speaking authoritatively and finally resolving the issue.  Instead, McCain is able to single-handedly keep the issue alive and can now dismiss the entire notion of any change whatsoever.  Similarly, when Obama is silent about what his current national priorities are, he enables the always exciting Palin to capture the public’s daily fascination.

When the most interesting news related to the President in the past week was him getting a fat lip, then it should be readily apparent that this President’s lack of passion and decisiveness on major issues is resulting in a public that is fast boring of him.  Presumably, Obama is waiting until the State of the Union Address in January to unleash Obama 2.0.  However, two months is a long time to wait to grab back the spotlight, and Palin and McCain will have tons more media appearances before then that are sure to deliver blows to Obama that stitches will not be able to fix.