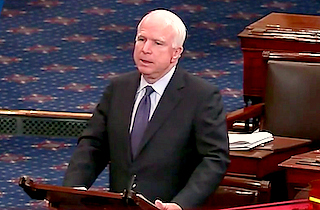 War booster but torture critic Senator John McCain (R-AZ) took to the Senate floor Tuesday afternoon to in no uncertain terms condemn the CIA’s torture practices under the Bush administration, arguing that the Senate Intelligence Committee report proved that not only was torture morally objectionable but also ineffective — the true reason, McCain said, so many opposed this report’s release.

Saying that the CIA’s practices “stained our national honor, did much harm and little practical good,” McCain added, “What might come as a surprise, not just to our enemies, but to many Americans, is how little these practices did to aid our efforts to bring 9/11 culprits to justice and to find and prevent terrorist attacks today and tomorrow.”

“That could be a real surprise, since it contradicts the many assurances provided by intelligence officials on the record and in private that enhanced interrogation techniques were indispensable in the war against terrorism. And I suspect the objection of those same officials to the release of this report is really focused on that disclosure – torture’s ineffectiveness – because we gave up much in the expectation that torture would make us safer. Too much.”

“Terrorists might use the report’s re-identification of the practices as an excuse to attack Americans,” he added, referring to the claim that the report’s release would needlessly endanger American lives, “but they hardly need an excuse for that.”

McCain overall decried the notion that torture was a necessary tradeoff for the security in the war on terror. “Our enemies act without conscience. We must not,” he said. “We need not risk our national honor to prevail in this or any war.”