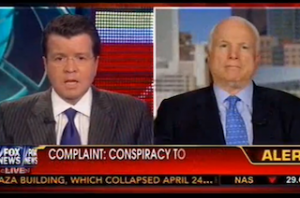 Senator John McCain (R-AZ) joined Neil Cavuto on Fox News Wednesday afternoon to discuss the arrest of three additional suspects in the Boston Marathon bombing investigation, two of whom are Kazakh citizens in the U.S. on student visas, and immediately turned to immigration reform as a potential solution. McCain suggested that as the U.S. attempts to reform its immigration policy, we should look at resisting access from countries “where there has been significant influence of radical Islamic extremism.”

“It’s terribly disappointing,” McCain began, “that any person knowing the catastrophe and the mayhem and the act of terror that was committed by these two brothers would attempt to cover it up. All of us should be outraged.” He said the news has led him believe that “as part of overall immigration reform we should look at the process of who is allowed into this country, under what circumstances, what is their situation and background, particularly from countries that have histories such as Dagestan and Chechnya and others where there has been significant influence of radical Islamic extremism.”

Cavuto pointed out that one of the suspects, Azamat Tazhayakov, was kicked out of UMASS Dartmouth, which should have made his student visa “null and void” but he was able to return to the country after that happened.

“This seems to be a common thread throughout this whole catastrophe and tragedy,” McCain remarked, “is these individuals, where they came from, how they got here, how they stayed.” He added, “What I think would be very appropriate is to have hearings as we move forward with the immigration bill to try to fix what at least in this case appears to be a broken system.”

The call to tighten immigration procedures following the Boston attack has not only come from the right. Democratic Senator Bob Menendez made similar arguments last week on MSNBC, but whereas he suggested criminal background checks on individual immigrants, McCain appeared to be advocating restricting immigration from entire countries or regions.