McConnell Warns Reid: If He ‘Caves To Fringes’ On Filibuster, Tombstone Will Read ‘Man Who Killed Senate’
VIDEO

McConnell Warns Reid: If He ‘Caves To Fringes’ On Filibuster, Tombstone Will Read ‘Man Who Killed Senate’ 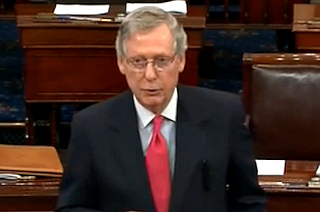 During a contentious battle on the floor of the United States Senate Thursday morning, Minority Leader Mitch McConnell invoked Majority Leader Harry Reid’s eternal slumber over the changing of the filibuster rules.

“As Senator Alexander noted, no majority leader wants written on his tombstone that he presided over the end of the Senate,” McConnell said. “Well, if this majority leader caves to the fringes and allows that to happen, I’m afraid that’s exactly what they’ll write.”

Reid was attempting to change the filibuster rules in the Senate, which many claim have been abused by the GOP minority to stall legislation and prevent nominations. The current GOP iteration in the Senate has used the filibuster—a tactic that actually refers to holding a bill to a sixty-vote threshold for discussion rather than its more traditional and trying uses—more times than any Congress in history. Reid had a chance to change the rules to eliminate this loophole at the start of the year, but lacked the votes for any substantive overhaul.

McConnell decried his current attempt as a “power grab.”

“We are the folks who believe deeply that a president of any party should work within the bounds of the Constitution,” McConnell said, “and that senators of both parties should fulfill their own constitutional obligations to thoroughly vet nominees. But we also believe in giving those nominees a fair hearing, and if you look at the facts, you’ll see we’ve already been doing just that.”

Watch the speech here, via C-SPAN: