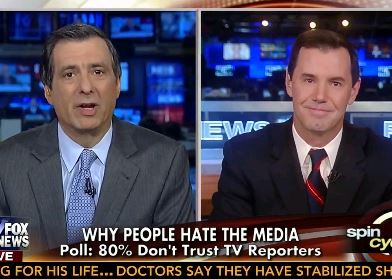 A panel on Fox News Channel’s Media Buzz on Sunday dug into the question of why the public so deeply mistrusts the news media. The host and guest asked whether media watchdogs, like this site and others, contribute to the general mistrust of the press because they amplify reporting mistakes and narrative promotion beyond their natural proportion.

“So you have reporters out there not only giving you the news, but perhaps giving context, perspective, and opinion,” he added. “And when you have a polarized society, what we’re seeing is more mistrust in reporters because they may be giving an opinion that the audience may not like.”

Concha also cited the emergence of media watchdogs as a possible reason for the public’s increasingly low opinion of the press. “Mistakes that used to be missed are now being magnified,” Concha said.

Host Howard Kurtz asked if some of these mistakes are being “overly magnified” and the reaction to them is disproportionate to their actual impact.

“So, basically, if one news organization makes a mistake, it does tarnish everybody else because people who don’t obsessively follow this say, ‘Well, you can’t really trust any of them?’” Kurtz asked.