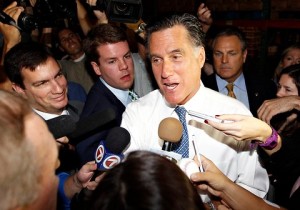 According to a new study from the Pew Research Center’s Project for Excellence in Journalism, an analysis of 52 newspaper, television, radio, and web outlets from January 2nd through April 15th saw Mitt Romney receiving significantly more positive news coverage than did President Obama.

Newsweek‘s Howard Kurtz observed that this analysis meant “Romney’s depiction by the media was more than twice as positive as the President’s.”

“So much for liberal bias,” Kurtz quipped:

Until that point, for most of the primary and caucus season, the tone of Romney’s news coverage vacillated primarily between mixed and unflattering. He enjoyed one week of clearly positive coverage (45% positive, 33% negative) in the week following his solid, if widely expected win in New Hampshire on Jan. 10.

But that media bounce was short lived. The week of his loss on Jan. 21 to Newt Gingrich in South Carolina, negative coverage of Romney (40%) outstripped positive (28%) by 12 points.

His coverage improved some after his win in Florida on Jan. 31, but not overwhelmingly so. Romney still had to contend with the media meme that he could not “close the deal” against a weak field of opponents. And throughout February, his coverage was more consistently more negative than positive. It reached a nadir the week of Feb. 13-19 (23% positive and 51% negative) when Romney was still reeling from losses to Santorum in the Feb. 7 contests in Missouri, Colorado and Minnesota.

After Romney’s tight victory in the Michigan primary on Feb. 28, news coverage about his candidacy became measurably more favorable and the portrayal of his rivals—particularly Rick Santorum—began to become more negative and to shrink in volume.

In contrast, President Obama did not have a single week in 2012 when positive coverage exceeded negative coverage. 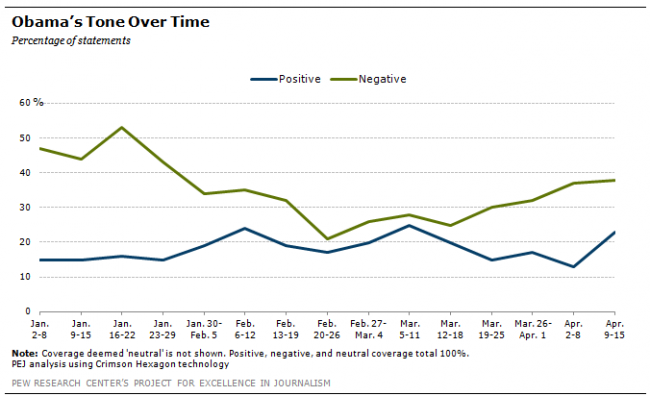 Pew blames Obama’s negative coverage on a number of factors:

One was the consistent criticism leveled at him by each of the Republican contenders during primary season. The other involved news coverage of issues—ranging from the tenuous economic recovery to the continuing challenges to his health care legislation—with which he was inextricably linked. An examination of the themes in Obama’s coverage also reveals that the coverage placed him firmly in campaign mode. His coverage that focused on the strategic frame exceeded that relating to policy issues by 3:1.