Media Crows About Politifact Slamming Romney, Ignores Them When They Hammer Democrats 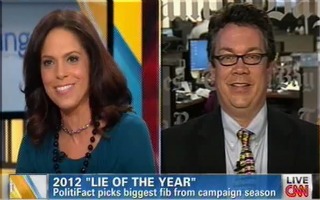 Both Republican and Democratic partisans have a tense relationship with the fact checkers at Politifact. Since the end of the 2012 election cycle, the media has been relatively disinterested in the fact checkers, though their work continues. Today, the Pulitzer Prize-winning group has announced their much anticipated Lie of the Year and, since the target of their finger wagging is former Republican presidential nominee Mitt Romney, it is safe to expect a revival of the media’s interest in Politifact. But the group has been actively condemning a major Democratic talking point in the ongoing fiscal cliff negotiations all week, meriting nary a mention on America’s cable news networks.

Politifact dubbed a Romney campaign ad, which claimed that a Jeep manufacturing plant in Ohio was closing down and moving production to China, to be their Lie of the Year. The misleading ad suggested that Chrysler would cease production of Jeeps in the United States, when the reality was that the automaker was merely expanding production to China.

Within minutes of the announcement, Politifact sent a representative to join CNN’s Soledad O’Brien to discuss his organization’s findings

What has gone conspicuously unmentioned in the media is a recent Politifact finding which eviscerated a united Democratic party’s argument that entitlement programs are not debt drivers and, as such, do not need to be reformed as part of a comprehensive deal to resolve the upcoming fiscal cliff.

On November 27, Politifact New Hampshire slammed Sen. Jeanne Shaheen (D-NH) for saying that Social Security is “off the table” as Democrats negotiate with Republicans to strike a mutually acceptable deal to reduce the nation’s spending. She insisted that Social Security is a self-supporting, pay-as-you-go program that is solvent until the 2030s – the problem with this statement is that it is entirely untrue.

“Social Security is not closed off from the rest of the government,” the Politifact’s indictment of Shaheen reads. “The program’s surplus funds are frequently invested in Treasury bonds, and during surplus years, the bonds earn interest paid with other government dollars. And in recent years, the amount of taxes collected have not equaled the benefits distributed, leaving the Social Security funds facing a cash deficit, which then forces the government to borrow more money to offset.”

The only problem with Politifact’s analysis is that their condemnation of Shaheen’s statement could be extended to just about every Democratic lawmaker in Washington. Her sentiment, that Social Security is sound and should be “off the table” is not her own invention. It has been echoed by Democrats across the political spectrum – from the President of the United States to the Senate Majority Leader to the most obscure Congressional Representative.

Do not expect the political media to trumpet this fact in the same way they are certain to chuckle over the Romney campaign’s factually-challenged Jeep ad. Conservatives willing to dismiss Politifact should also reflect for a minute before they condemn the fact checkers. Members of the media willing to trumpet Politifact’s Lie of the Year should be asked why they think Politifact’s other findings are being ignored, and the untruths they have identified continue to be purveyed by Democratic lawmakers.