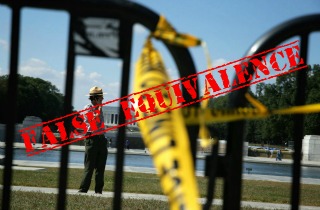 Government shutdowns are never welcome developments. They represent the culmination of a series of failures and have dire, real world consequences for many. Perhaps the worst aspect of any shutdown is that they are crises of choice – this shutdown was almost entirely avoidable.

Eight days into this shutdown, the government appears no closer to reopening. Republicans in Congress seem unable to settle on a face-saving concession from Democrats which they could accept in order to reopen the government. Democrats have adopted a recalcitrant position and are publicly refusing to even entertain the GOP’s floated demands. According to reports, an increasingly sidelined President Barack Obama called House Speaker John Boehner (R-OH) on Tuesday morning just to remind him that he’s not negotiating.

But this shutdown is unfolding in ways that do not precisely mirror its 1995-1996 cousins. Then, Republicans received most of the blame for closing down the government. In fact, the public is spreading blame for the shutdown rather evenly – Democrats, Republicans, and the president all receive nearly even amounts of scorn from the nation. As The New Republic’s Nate Cohn writes in his most recent analysis, Republicans are faring far better in public opinion polls than they did during the shutdowns which occurred under Bill Clinton.

Recent Pew Research Center and a CNN/ORC polls confirm that, while the GOP receives the more blame than other parties, majorities view every actor in Washington as being culpable.

The reasons for this are probably myriad: historically high levels of distrust in government and the unpopularity of the Affordable Care Act represent just two contributing factors which mitigate the political damage Republicans are sustaining during this shutdown fight.

But these and other factors require reasoned and deliberative analysis to comprehend. This is a difficult task to undertake when you’re thinking is clouded with rage – a condition apparently afflicting a number of members of the elite media.

Frustrated with the public’s refusal to entirely blame Republicans for the government shutdown, some in the media have taken to blaming… the media.

“These poll numbers are about a totally different media culture than we’ve had in the past,” insisted legendary journalist Carl Bernstein on MSNBC’s Morning Joe on Tuesday. “We need to start covering this story not 50/50 — this much on this side, that on the other. We need to cover it factually, because there are facts here that will show what this event is about, and where, in fact, is this anger, hatred of Obama coming from, what is the root of this.”

Ah, the favored “false equivalency” argument. This religious tenet, a toxic notion popularized recently by Aaron Sorkin’s The Newsroom and adopted uncritically by liberal journalists, posits that the media defaults to offering equal coverage to ideas that are fundamentally nonsensical in order to create the impression that they are fair.

This idea is crystallized in this bit of dialogue from the program’s first season:

“The news isn’t biased toward the left or toward the right, it’s biased toward fairness. If the Republican congressional caucus were to walk onto the floor of the House and offer a resolution saying the world is flat,” the next day’s headlines would likely read: “Democrats and Republicans can’t agree on shape of Earth.”

This is how the preternaturally logical main character in Sorkin’s fantasy cable news drama justifies the banishing of ideas from public discourse with which he disagrees.

As this shutdown continues, progressive journalists find a lot to admire in Sorkin’s instincts:

“[I]n a case like the fiscal crisis, false equivalence matters,” writes James Poniewozik in TIME Magazine. “It’s the difference between reporting an extraordinary event and an ordinary one, which in this case is crucial to how the story plays out politically.”

“So here, ‘Both sides got us into this mess’ sounds neutral, but it’s actually taking a side–or, at least, adopting the framing that one side is counting on using to a political end,” he concludes. “Reality doesn’t always have a bias, liberal or otherwise. But when it does, it’s not journalism’s job to rebalance reality.”

Ironically, TIME took a hit from the Huffington Post this week for engaging in “false equivalence” in their cover article. “Professor, historian, author” Joseph A. Palermo wrote in HuffPost that journalists would be tripping over themselves to blame Democrats for setting an “anti-democratic precedent” if they had precipitated the shutdown, but are apparently protective of the reputations of Republican lawmakers in Washington.

“This isn’t ‘gridlock.’ It is a ferocious struggle within one party, between its traditionalists and its radical factions, with results that unfortunately can harm all the rest of us — and, should there be a debt default, could harm the rest of the world too,” an animated James Fallows writes in The Atlantic.

As a matter of journalism, any story that presents the disagreements as a “standoff,” a “showdown,” a “failure of leadership,” a sign of “partisan gridlock,” or any of the other usual terms for political disagreement, represents a failure of journalism*** and an inability to see or describe what is going on.

These accomplished and articulate journalists and historians are taking the easy way out. Rather than ask why the public is choosing to cast a pox on both of Washington’s houses, they blame the media for misinforming them. This is a time-honored tradition in conservative circles – one these authors would easily recognize as misguided reasoning if the shoe were on the other foot.

But so long as there is an echo chamber willing to consume and validate these views, the real reasons why the public is not directing the entirety of their outrage at Republicans will continue to elude media elites. The notion of a “false equivalence” in the press may be comforting, but it is not instructive.