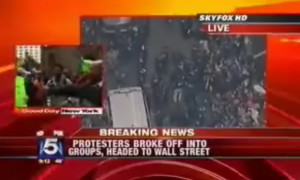 Anyone living in the greater New York area has likely been glued to their televisions this morning, at work or at home, watching the overhead helicopter shots and on-the-ground reporting from the Occupy Wall Street protests on local news (PIX 11 and Fox 5, in particular, were all over it). Yes, this may be a local story at heart, but there are occupy movements in every major city, and the scope of OWS has gone global. Plus, some of of the overhead shots — when a protester tries to run past a police barricade and is swarmed on by police, who arrest and drag him away — is as hypnotizing as the car chases that cable news networks usually cut to on slow days.

While Fox 5 in New York has been on top of the protests for most of the morning (literally — their helicopter shots have been top notch in chronicling the protests), a quick jump around the dial a little after 9 a.m. showed a general disinterest in the unfolding action in downtown Manhattan:

Whether you agree with the OWS protests or not, they make for compelling television. And when Fox 5 went away from them to do a spotlight on pets, the video crack of getting to watch protesters get thrown to the ground and dragged away by cops (or, for the other end of the spectrum, the chance to watch a minor historical event unfold) was taken from us.

Hopefully Fox comes to their senses soon, and bails on the usual banal morning show fodder to get the overhead shots of the protests back on live TV. We may be watching for all the wrong reasons, but the fact that we’re watching should be all the reason they need.

UPDATE: A CNN spokesperson clarifies to Mediaite that the network did cover the protests during part of their morning programming: