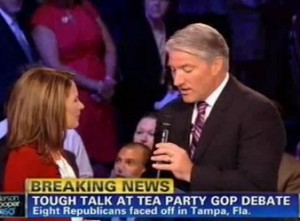 Within the past 24 hours, I have watched at least three different mainstream journalists allow Rep. Michele Bachmann to claim that the HPV vaccine is “dangerous,” and that it might cause “mental retardation,” without challenging her, or notifying their audiences (of millions) that the vaccine is safe. First, Wolf Blitzer let it sail by during last night’s CNN/Tea Party debate, then CNN’s John King followed suit during a post-debate interview, and The Today Show‘s Matt Lauer skated by it Tuesday morning. These journalists are failing their most important function, to act in the public’s interest.

Wolf Blitzer can be forgiven, somewhat, for not having detailed data about the HPV vaccine handy when Bachmann blurted out that the the “potentially dangerous” drug had “negative effects,” but such a claim should have elicited a followup. Can you imagine if Bachmann had said that about, say, Diet Coke?

Barring that, someone at CNN should have checked it out during the time between Blitzer’s question and John King’s post-debate interview.

But there’s simply no excuse for Lauer’s failure to challenge Bachmann the following morning. She didn’t bring up the HPV vaccine, Lauer did, and he already knew she was going around claiming that it’s harmful. Hell, without knowing anything about HPV, any reporter would challenge the “evidence” as Bachmann presented it.

This isn’t about making Michele Bachmann look stupid. While Blitzer, King, and Lauer could have asked her to respond to the science that refutes her claims, they could also have simply paused to mention that the CDC, the FDA, and every non-quack in the known world says the vaccine is safe. Ten seconds. In each case, though, these journalists were more concerned about refereeing a food fight between Bachmann and Rick Perry, so their massive audiences got a dose of real poison: misinformation about a life-saving drug.

You can see Blitzer’s clip here, and Lauer’s here. Following the debate last night, John King interviewed Bachmann, where her claim that the vaccine would “do its damage” went unchallenged once again. CNN medical expert Elizabeth Cohen, who has a Masters in Public Health, did a creditable job of trying to unring the bell Tuesday, beginning on American Morning. Here are both clips, from CNN:

According to a CNN spokesperson, Elizabeth Cohen has been fact-checking this all day, over at least six segments. However, even if those segments managed to reach the same number of viewers as last night’s high-profile debate, it certainly won’t reach the same ones.

Hopefully, viewers did not get the idea that the weight of scientific data is somehow remotely balanced by anecdotal hysteria. It isn’t. Dr. Cohen is correct that the long-term effects of the vaccine are unknown, but that is true of every new drug or treatment.

Let’s set aside the politics of this for a moment (and I’m biting through my lip to do that). Whether you think the vaccine ought to be mandatory or not, it is imperative that people making the choice whether to vaccinate their kids (or themselves) have accurate information. The HPV vaccine prevents a virus that causes cervical cancer, so this is a life-and-death issue.

According to the Centers for Disease Control, the HPV vaccine is as safe, if not safer than, any other vaccine. Only .05% of patients who took the vaccine reported any adverse effects at all, and of those, 8% were considered serious, and none (zero) of them could be linked to the vaccine itself. You’d get more reports than that from people who ate a Tic Tac.

The window in which the vaccine is not unlimited, either. It’s only proven effective for ages 12-26. Whatever your beliefs about the government’s ability to mandate the vaccine, I would hope that everyone would bear in mind that not every sex act is a sin (or even consensual), and that not every sin deserves to be punished with cancer.

Now, people have every right in the world to be skeptical of science, but they need to be told about the science. If even one person dies because Michele Bachmann scared them out of taking the HPV vaccine (well-meaning though she may be), that will be a tragedy, one that could have been avoided if the media did its job.

An NBC spokesperson declined to comment for this article.

Update: Via Twitter, Martin Bashir Live points out that Bashir ran two segments calling Bachmann out, and setting forth the facts about the HPV vaccine. Both segments were specifically pegged to Bachmann’s Today interview.

In the second segment, Bashir delivers a forceful commentary about the serious danger of such misinformation:

I asked whoever runs the Bashir Live Twitter feed if Matt Lauer had a duty to challenge Bachmann. They haven’t responded, as yet.

This post has been updated to reflect that Elizabeth Cohen has a Masters in Public Health, not an MD.