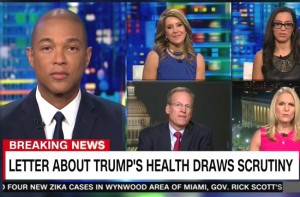 An eagle-eyed viewer sent me this amusing tip this morning: these are two CNN chyrons, literally less than a minute apart.

I should interject here and say, no, I don’t actually believe the Trump campaign’s bizarre claim that Hillary Clinton is secretly brain-damaged, or Matt Drudge‘s not-terribly-subtle insistence that she’s hiding some sort of illness. But it seems to me that Clinton health trutherism and Trump health trutherism are two sides of the same coin, but only one is being treated as off-limits.

I also don’t believe questions about Clinton and Trump’s health ought to be off-limits necessarily. As The New York Times pointed out this week, both have fallen far short of the usual medical disclosures made by presidential candidates. John McCain, for example, opened up his entire thousand-page medical history to reporters to pore over. Trump and Clinton only released short letters from their personal physicians saying they were in good health in 2015, and neither have provided regular health updates throughout a vigorous campaign as Mitt Romney and Ronald Reagan did.

So the claims about Hillary Clinton’s health are “debunked,” as CNN put it, only by virtue of that letter from her physician. But when Trump released a similar letter, his received an immense and unprecedented amount of scrutiny.

Neither of which is a really solid reason for doubting the doctor’s sincerity that Trump is in perfect health. The medical “errors” in the letter that critics hyperventilate about (like saying Trump’s medical tests showed “only positive results”) sound more like a doctor trying to put things in layman’s terms and writing for the average Trump supporter. As for the overly bold language, bad grammar, and worse hair: surprise, Donald Trump’s doctor is a bit of a character. Have you met his lawyer?

What we do know about Dr. Bornstein is that he was once a fellow of the American College of Gastroenterology (but is no longer, despite his claims to the contrary), he attended the prestigious Tufts University for undergrad and medical school, and he’s been a practicing physician for forty-odd years. It may very well that critics are right and that he’s a soulless quack willing to lie for a client. But isn’t that the sort of the claim that usually requires, you know, evidence?

The best Trump health truthers can come up with is that Bornstein was sued for malpractice in 2000 after a patient died on the operating table. But that displays an ignorance of how unfortunately common those suits are. 61% of doctors are sued for malpractice at some point in their careers. Even Ben Carson, widely acknowledged as a brilliant surgeon, was sued eight times in his career. That Bornstein could operate for forty years and be sued once is, frankly, not that bad.

Meanwhile, no less than The New York Times points out the letter from Clinton’s physician appears to downplay health issues that the Clintons have previously depicted as much more serious. Per the doctor’s letter, Clinton was fully healed from her 2012 concussion in only two months. But at the time, Bill said she “required six months of very serious work” to get over the aftermath.

It seems to me that if Trump haters are justified in scrutinizing every detail and straight-up alleging that “Trump himself blurted out honorifics about his health and had a quack doctor sign his name to it,” Clinton haters would be equally justified in taking that small contradiction and making a mountain out of a molehill. As it happens, I think both conspiracy theories are kinda dumb. But to treat one as okay and the other as horrible and sexist seems like a glaring double standard.