Media Matters, MSNBC Have No Idea What ‘Fake News’ Is

I was a little bit surprised to see this graphic flash across my TV screen Friday morning. 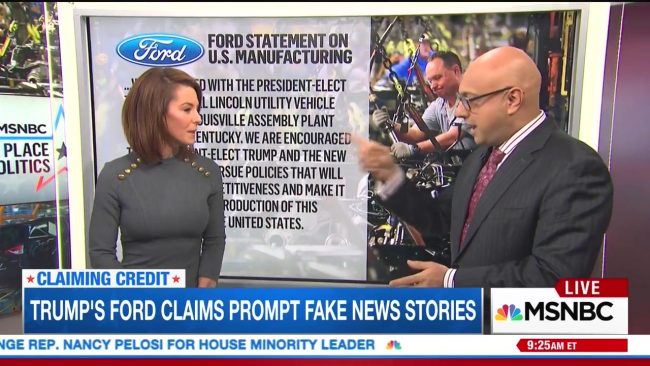 I had read that Donald Trump took credit on Twitter for saving a Kentucky Ford plant from moving to Mexico, only for Ford to immediately come out and clarify that it was never going to Mexico in the first place. But this was the first time I had heard that news outlets were putting out “fake news stories” about Trump’s claim. What was MSNBC talking about?

Unfortunately, the actual segment didn’t shed any light on that accusation or name any outlets. But as best as I can tell, that chyron is based on the complaint of a handful of Media Matters staffers on Twitter. (That a concerted PR effort by employees of a devoted Clinton ally was repeated uncritically on MSNBC in a hard-news hour is a topic for another day):

Every single one of these headlines is completely wrong, easily fact checked, and peddling a fake news story spread by the president-elect. pic.twitter.com/vsE41hFjZw

Notice anything about the headlines they’re tweeting about? Despite the claims that each one is “completely wrong” or “fake news,” every single headline is 100% correct.

None of these headlines claim that Ford is moving plants from Kentucky. They claim that Trump said they were. That’s undeniably true. The anger at the media for accurately reporting what Trump said seems misplaced to say the least: they’re not the ones lying to the American people.

If Trump had claimed yesterday to have struck up a bargain with the Martians, headlines across the country today would read Trump Claims to Have Made Agreement With Little People From Mars. Would that be a “fake news story”? No, because the story isn’t the fact that Martians exact, it’s that a newsworthy person (Trump) made that claim.

Or put another way, if the stories and headlines tagged by MMFA are “fake,” virtually every single outlet publishes “fake news” on a daily basis, because politicians and public officials lie on a daily basis. I guess you could make the case that headlines should be more assertive and overtly accuse those politicians of lying, but I don’t recall Media Matters pushing for that standard during the Obama years. More to the point, that seems like a slippery slope that would allow reporters and editors to inject their bias into stories.

This is just unhelpful. There are indeed many, many fake news stories that are being spread on social media, stories that are completely fabricated and intended to decieve. That’s not at all comparable to respected media outlets accurately reporting on what the president-elect says.

Unfortunately, there now seems to be a concerted effort to conflate “fake news” with “stories I don’t like.” A little sad to see that MSNBC bought into it, albeit briefly.