Media Meme: Do You Get Nervous Around Muslims On Planes? (Bob Beckel Does) 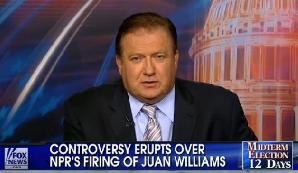 The final straw in Juan Williams‘ career at NPR was that, although he’s not happy about it, he sometimes gets nervous around Muslims wearing traditional garb on airplanes.

This honest statement, made in the context of his argument why Bill O’Reilly was wrong to say what he said on The View, has been echoed throughout the media, including Democratic analyst Bob Beckel last night.

Beckel was a guest on Sean Hannity‘s Fox News show, which, shockingly, made the Juan Williams NPR story a centerpiece (like most shows on FNC yesterday). No one would argue Beckel’s Democratic bonafides, so it takes on added significance when he says things like this: “Let me repeat exactly what he said, because I would put the words in my mouth. I don’t like the thought that when I get on a plane and I see people with Muslim garb, that it makes me nervous, but it does.”

It’s an admission about the post-9/11 world we live in. Beckel says what NPR did was “illiberal,” and “I think I can speak for a lot of liberals tonight, that we find what NPR did to be outrageous, atrocious, and well, well out of bounds.”

During Morning Joe‘s strong defense of Williams yesterday (which they did again this morning) Joe Scarborough and others talked about how unfortunate, but how normal, it is for people to feel the way Williams described. It’s not like Williams was going to tell the police that a terrorist was on-board. But it’s that slight nervousness – interior, subtle racial stereotyping – that sadly exists for many people in the wake of 9/11.

Who else in the media will talk about whether they get nervous, or not, when they see someone in full Muslim garb on an airplane? It’s probably not over yet.