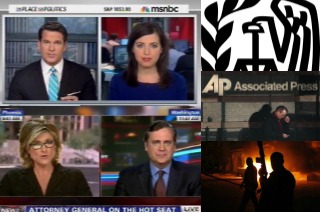 The last several days have been taxing for many members of the political press. The burst of scandals surrounding the conduct of the White House on a variety of fronts have forced the media to turn a critical eye towards the president. Some prominent conservative commentators have warned that this behavioral aberration by much of the establishment media cannot last. They have said that even the slightest overstep by Republicans in response to the White House’s scandals would give the press and excuse to revert to their familiar and satisfying focus on the GOP’s pathological mistrust of President Barack Obama and his policies. While the press does not yet have an overwhelming amount of material to support this effort, they have begun to settle back into that comfortable place.

“The IRS has admitted to targeting conservatives, even if the White House continues to be stuck on the word ‘if,’” said House Speaker John Boehner (R-OH) at a Wednesday news conference. “Now my question isn’t about who’s going to resign. My question is: Who’s going to jail over this scandal?”

Sure, it’s not much to go on, but this undoubtedly a hyperbolic reaction – at least, at this stage — to the news that the Internal Revenue Service systematically targeted conservative groups with onerous and burdensome information requests which forced some to abandon their effort to secure tax-exempt status has given the press a reason to focus once again on Republicans.

RELATED: Speaker Boehner Rails Against IRS Scandal: ‘Who’s Going To Jail Over This?’

With utter predictability, the media sprang into action with a righteous scolding.

“Now you’re hearing even further politicization of something that may not be so political,” declared CNN anchor Ashleigh Banfield. “When you start hearing the cry for potential jail terms — specifically when it comes to the IRS issue in targeting of conservative groups, do you see this as going that far?”

The short answer to this question from George Washington University Law Professor Jonathan Turley was “no.” Not because of the criminal misconduct of the IRS, but because “rarely do people go to jail for it.”

MSNBC anchor Thomas Roberts followed suit. He began his segment on GOP overreach by playing a portion of Republican National Committee web video chastising the president for failing to abide by his own promise of transparency.

“With Benghazi, Republicans have not really found a smoking gun,” Carmon asserted. “I don’t even understand that they are accusing the president of doing.”

She added that the scandals surrounding the IRS and the Associated Press are slightly more complicated but, in her opinion, the GOP would be exhibiting extraordinary hypocrisy if they were to even acknowledge the existence of a scandal.

“For Republicans, it would be pretty hypocritical to pretend to care about it,” Carmon said of the Department of Justice’s acquisition of months of telephone records form the AP.

“Well, sure,” Roberts agreed. “It was last year, roughly about this time, that the right – that is – was asking a lot of questions of the White House.”

“They even accused the president of being the one in the administration of sending these leaks out into the public on their own,” he noted.

This trend is certain to accelerate. These are, for now, the political press’ opening bid to shift the focus of the story about the White House’s scandalous overreach into a story about Republican’s pathological desire to attack the president and his administration.