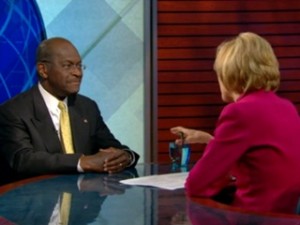 One of the subplots to last week’s Herman Cain Bad-Press-A-Palooza (bad press that seems to have helped him) was his supposed gaffe in an interview with PBS’ Judy Woodruff on Monday night’s Newshour. The clip has widely been reported as demonstrating that Cain did not know that China has had nuclear weapons since 1964, and that he thinks they still don’t. For a week now, I’ve been waiting for someone to point out that Cain indicated no such thing.

Here’s a clip of the “gaffe” in question, in case you missed it:

When the clip first hit, I was neck-deep in other work, preparing for a trip that took me out-of-pocket for the better part of Tuesday, so at first, I only saw the headline. It wasn’t until a few days later that I actually saw the clip. While Cain is widely quoted as having said that China was “trying to develop nuclear capability, and they want to develop more aircraft carriers like we have,” the “and” in that sentence was more like an “umm,” a verbal placeholder, not meant to separate the two thoughts.

He was referring specifically to the Chinese aircraft carrier program, which, in fact, began sea trials in August. “And” or “umm” notwithstanding, you can “develop” a capability that you already possess, so the attack is unfair even without the context, but with that context, it is clear that Cain was talking about the Chinese carrier program.

You would expect liberals to beat up on Cain over this “gaffe,” much as they did when Sarah Palin correctly noted that the Soviets “won that race to space” with the launch of Sputnik 1 (while completely misunderstanding its significance, though). However, when ostensibly neutral news organizations promote the fallacy, it’s a huge problem.

This isn’t about defending Herman Cain’s foreign policy expertise. He has a long track record of foreign policy ignorance, and indeed, has been openly contemptuous of the idea that he be expected to have even rudimentary knowledge of the subject.

Even though I missed the landing of this gaffe by a few days, I decided to write this column because the “China Gaffe” came up again on Sunday’s This Week with Christiane Amanpour, and the host followed the clip by saying, “We know that China has had nuclear capabilities since the 1960s.”

For mainstream journalists to promote such an obvious falsehood is inexcusable, but what I found interesting (aside from Newsweek’s Niall Ferguson referring to the clip as an “oriental embarassment”) was that conservative panelist George Will didn’t bother to push back against it, either. This doesn’t appear to be about a left/right bias, as lots of conservative blogs reported the gaffe. too, and there has been little or no pushback.

The best explanation I can think of is that the appeal of the (distorted view of) the clip, fitting as it does into the pre-packaged narrative about Cain and foreign policy, overcame the media’s ability to understand the words that were coming out of Herman Cain’s mouth. While we’ve come to expect a certain amount of license from the opposing teams in the opinion media, it’s inexcusable for the referees to miss such a glaringly obvious call.

Here’s the This Week segment in question, from ABC News: