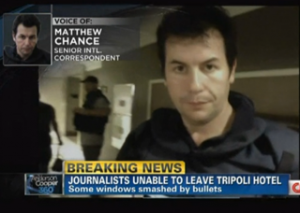 Last night CNN’s Matthew Chance was the first to report that over 30 journalists holed up in a Tripoli hotel were being held against their will. Though the U.S. news media seemed to very carefully describe their plight as “being trapped,” it became clear that they were, in fact, being held hostage. After five days of being held captive, however, they were released this morning. Mediaite had the opportunity to chat with Chance just now, via an undependable satellite phone connection.

Mediaite: Tell me how it felt upon learning that you were actually being freed from captivity?

Chance: It was an unbelievable relief – it’s really hard to describe. after being held captive for five days we sort of felt agoraphobic, really sort of developed a fear of the outside, especially since no one knew exactly what was going on. But when we got out there was a great feeling of adrenalin and joy. We all got pretty emotional when we arrived at the destination.

Mediaite: And how do you feel now?

Chance: Well I’m pretty exhilarated but also incredibly tired. I honestly cannot recall if I’ve slept at all in the last five days. I tried to sleep a bit in the hallway last night but I had no luck.

Mediaite: Did you feel anger or animus from your captors, or distrust? How would you describe their emotional state?

Chance: Well they had guns and were clearly upset, but they never pointed their guns at us. We couldn’t quite tell if we were being used as some sort of pawns in a larger strategy or what exactly. But the captors seemed to think that the fall of their government was all part of some international media conspiracy, and while they didn’t seem to hold us directly responsible, they didn’t exactly like us. In fact one of the captors told us something to the effect of ‘you all should be happy now that Libyans are killing other Libyans.”

Mediaite: How did you relate with your other media cohorts also being held captive?

Chance: Well it was quite a bit different from a typical international news story, in that we are all pretty competitive with one another trying to break stories. But we decided very early that we would all collaborate with one another from the very begining – there was AP, Sky News, Fox, (inaudbile)…we all got together and realized that we’d have to work together. We stayed together in the same room and worked very closely together as a team…that camaraderie helped immensely with just coping with the psychological strain.

Mediaite: How did you negotiate your departure from the Rixos – was there a leader that negotiated with your captors?

Chance: Well, its not like we nominated a leader of our group, but obviously those who spoke Arabic had a huge advantage in talking to those who were holding us captive. My producer Jomana (Karadsheh) was enormously important in the process, first asking for the Red Cross to be able to come in. That had been agreed upon and three of us were taken outside, then that very quickly turned into our release.