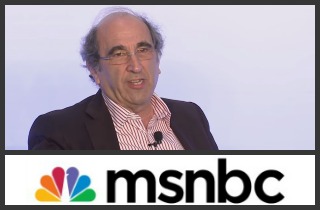 When venerable TV news executive Andy Lack was named the new president of NBC News, it was clear he was given the authority and autonomy from Comcast to clean house. The Today Show was in desperate need of change, Nightly News with Brian Wil — er, umm, Nightly News needed to find a new “voice”, and MSNBC’s ratings were in the tank.

Now the Today Show has a new EP in Noah Oppenheim and the numbers appear to be improving. Most of the media attention, however, has been focused on what Lack will do with Nightly News. Some suggest he’ll try to bring back Brian Williams but most find that unlikely or nearly impossible. We have also heard that NBC News has considered a sort of probationary period for Williams in the field, but the long-time anchor might not accept that; and Lack still might not even offer it.

But MSNBC is a larger, more complex problem.

Mediaite has learned that Lack is now beginning to take an active role in the herculean task of trying to right that left-leaning ship: Specifically, Lack is now often attending MSNBC chief Phil Griffin‘s 11:30 a.m. editorial meetings; and, to quote one witness, Lack regularly appears “underwhelmed” with the story pitches.

Even more daunting for the staffs of three struggling MSNBC programs, Lack has requested evidence that their shows remain viable.

A couple of weeks ago, the executive producers of Now with Alex Wagner, The Ed Show, and All In with Chris Hayes were told to prepare “sizzle reels” of the best their programs have to offer. Theoretically, this exercise will help them identify what works best on their respective shows but, in reality, our sources say, any or all of these shows could soon be on the chopping block. The senior staffs of all three programs, we are told, are now concerned that their days are numbered.

Mediaite has also been told that Lack is considering a total overhaul of MSNBC’s daytime programming. The days of Lack’s predecessor Patricia Fili-Krushel deferring to Griffin’s judgment on programming are, according to our sources, officially over.

The big question, of course, remains what will Lack do with Griffin himself. NBC insiders tell Mediaite that while Lack likes Griffin personally, he has serious questions about Griffin’s ability to effectively run a big cable network like MSNBC. And, so far, we hear, nothing Lack has seen has changed that impression.

There’s a new sheriff in MSNBC town and he’s apparently taking names and preparing to make the changes necessary to make the network competitive again.