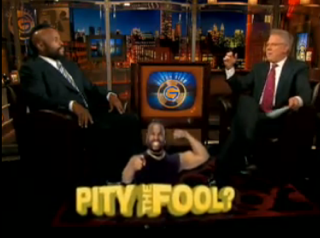 Here at Mediaite, we believe we have a responsibility of passing down our colorful history to the next generation. We do it for the children. So as we approach the second anniversary of our founding, we will be regularly taking a look back at the moments that made us laugh, cry, and throw things at our television set– but probably just made us roll our eyes at the time. Herein is the third installment of Mediaite Historical Society Presents:

Glenn Beck‘s star may have risen higher than ever when he arrived at Fox News, but long before he was drawing on chalkboards and counting czars on his hands he was up to all sorts of mischief at Headline News, where his program was a bit more of a pop culture hodgepodge than a daunting, consistent barrage of information on how the world may or may not be ready to call it a lifetime. Beck was also more prone to interviewing guests, and one night entertained the legendary Mr. T,  who he somehow got to comment on the Mark Foley scandal.

Beck appears thrilled to be able to speak with the A-Team star and ask him how he feels about those around him constantly yelling “I pity the fool!” at him, which Mr. T seems to take in stride. “That’s a compliment to me,” he explained, “I go down the street, people see me ‘hey I pity–‘ right on man, that’s a compliment to me.” Alright then. With that in mind, Beck introduces a segment entitled– you guessed it– “I Pity The Fool”– introduced by some atrocious animation and requiring Mr. T to say whether or not he pities certain topical individuals of the moment (2007). The only one deserving of pity, it turns out, is former Congressman Mark Foley, though, to Jessica Alba‘s credit, Mr. T didn’t know who she was.

Another interesting tidbit of this interview is that Beck alludes to (and airs a segment of) a mysterious interview with hair icon Fabio— an interview we had no success finding. If anyone has more leads on the events and contents of said interview, the Historical Society would greatly appreciated the sleuthing.

The segment via Headline News below: