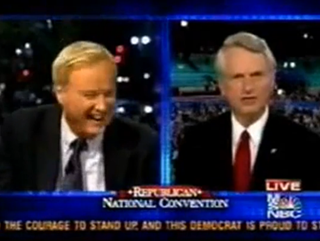 Here at Mediaite, we believe we have a responsibility of passing down our colorful history to the next generation. We do it for the children. So as we approach the second anniversary of our founding, we will be regularly taking a look back at the moments that made us laugh, cry, and throw things at our television set– but probably just made us roll our eyes at the time. Herein is the ninth installment of Mediaite Historical Society Presents:

Today, we take a video out of the vault to remind everyone that the 2012 elections are not yet the most uncivil in history, nor should we be wishing them to be anything proper or hushed. Back in the calm old days of 2004, when an incumbent president was facing a moderately flimsy challenge from a Democrat with charisma issues, the controversy of the political reached fever pitch during the Republican National Convention, which occurred at the height of the Swift Boat Veterans for Truth movement (remember that?) and featured even a Democrat or two on the podium.

Democrat Zell Miller was one of those Democrats, blasting Sen. John Kerry for voting against the Iraq War funding (“What are they supposed to fight with, spitballs?”) and praising President Bush for his work. This got him more than a few questions on MSNBC, where Chris Matthews eagerly awaited to wonder what he was doing at a rival party’s convention giving speeches. After asking a couple of questions and getting answers that didn’t really satisfy him, Matthews interrupted to repeat again. “It’s a tough question, it takes a few words,” he told Miller. The latter, outraged, began shouting at Matthews to “get out of my face,” noting amid uproarious laughter, “I wish we lived in the days where you could challenge a person to a duel.”

Matthews didn’t incline to note whether he would have accepted, laughing too hard to speak, but finally caught his breath to defend an interview with a woman accusing Sen. Kerry of faking his Purple Heart injury, which Miller characterized as Matthews “browbeating her to death.” We can only hope to have a moment half as classic within the next year and a half.

The classic via MSNBC below: