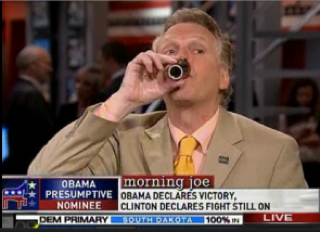 Here at Mediaite, we believe we have a responsibility of passing down our colorful history to the next generation. We do it for the children. So as we approach the second anniversary of our founding, we will be regularly taking a look back at the moments that made us laugh, cry, and throw things at our television set– but probably just made us roll our eyes at the time. Herein is the eighth installment of Mediaite Historical Society Presents:

In many ways, the 2012 election is shaping up to be a far more tedious operation than its predecessor, partly due to the absence of good-natured political trolling. No one mastered the art of defying reality during the 2008 elections quite like Hillary Clinton campaign chairman Terry McAuliffe, who insisted well past the realm of possibility that Clinton would be the Democratic nominee, until eventually drowning his sorrows in Puerto Rican rum. On live television.

It is difficult to remember so far back into the past, especially with the same presidential election process dangling menacingly over the news cycle like a dagger ready to strike, but the Democratic primaries continued all the way into June 2008, partly due to Clinton and McAuliffe refusing to concede the primary despite Sen. Barack Obama acquiring the necessary number of primary delegates. At the time it was obnoxious and inexplicable, but there is something warm and endearing about McAuliffe’s unshakable faith in retrospect (and some, like Jon Stewart, gave that charm even more of a platform at the time).

Welcomed to the soothing sounds of Ricky Martin, McAuliffe shouted various things about Clinton’s inevitably victory in Puerto Rico and the upcoming celebration. A concerned Mika Brzezinski did the honors of breaking the news to McAuliffe, that his dreams of a Clinton once again in the general election had been shattered long ago. McAuliffe responded to the fact that his candidate would very likely lose this primary and had already for all intents and purposes lost the nomination by brandishing a Bacardi bottle and promising it to the host. “You and I are going to share this together to celebrate another big win for Hillary Clinton,” he told Brzezinski, who shook her head grimly. He then proceeded to make some sort of case for Clinton winning (she had, in fact, won the popular vote– which has no impact on the primaries), clad in a vibrant green Hawaiian shirt that made the already dubious claims that much harder to take seriously.

Needless to say, Clinton did not win the nomination, but McAuliffe made good on his promise to do shots with the Morning Joe crew anyway a few days later, in what is arguably the most memorable cable news clip of the 2008 election. Seated beside Brzezinski and Pat Buchanan (who complained the Bacardi smelled “like ether”), McAuliffe finally admitted to Joe Scarborough that Sen. Obama had gotten the delegate count he needed, but that nonetheless Clinton’s campaign was victorious in metaphorical ways that got more elaborate as the alcohol flowed. He does not quite admit at the end of the clip that the election “is over.”

The segment is an instant classic, and serve as a reminder of the kind of excitement that’s just around the corner for us in 2012. We can only hope next election will live up to the last. McAuliffe at his best via MSNBC below: