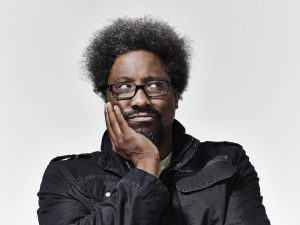 These United States of America currently finds itself in a very divided state. Red State versus Blue State; Progressive vs Conservative, Fox News vs CNN; Rush Limbaugh vs NPR…the list of things that help define our cultural split is a long one.

Enter W. Kamau Bell, the stand-up comedian who hosts CNN’s United Shades of America, and is trying to better understand “what’s going on.”

With a seeming insatiable curiosity to better understand the nation’s disenfranchised, sub-cultures, marginalia and extremists, Bell understands that there are some real issues and deep-seated problems in America today. But rather that exploiting that with fear and ignorance, Bell tries to connect on a more human level and, impossibly, succeeds in taking a mostly positive, daresay, optimistic point of view. Even when he might be the first person of color willingly attending a KKK rally burning a cross.

Mediaite recently sat down with Bell to discuss his approach, his show and the pride and regrets he feels about its run. Bell succeeds in reminding his viewers, and himself, that despite some significant political, cultural and religious differences, there is more that we all have in common with one another. And at this hyper-divided and tense time, that’s not a bad thing to be reminded of.

The interview below has been edited for clarity and content. The United Shades of America airs on CNN at 10PM Eastern Time.

Mediaite: Your show is very interesting and hard to qualify. There are comedic parts to it, it took sort of a documentary style. Is it news? How do you define the format and style of your show?

Kamau: [laughs] “A curious American tries to understand his country” is the format of the show. And that curious American happens to be a stand-up comedian. So, humor’s a part of my curiosity, in the same way that like with (Anthony) Bourdain, food is a part of his curiosity. So for me, I’m really grateful for the fact that CNN understands that they bought a show that’s hosted by a comedian but they don’t expect it to be funny all the way through. They allow me to sort of like follow my nose and I appreciate that, because on another network if it was meant to if they wanted a comedian to host they might want it to be over the top all the time. But I appreciate the fact that a news network allows me to sort of really be conservative about the facts and the relevancy and getting the story right.

M: How has your experience as a stand up comedian helped you in interviewing your subjects and hosting this show?

K: Stand-up comedians know how to walk into a room, even if you’re not performing, just read the temperature of a room, and can easily sort of tell what’s going on or what people are sort of feeling in the room and it allows you to sort of approach people. If you do any level of improvisation or crowd work, which I don’t do a ton of, but I do enough of that you can sort of put down a heckler hard or you can sort of just gently bring them down to the surface. So you sort of learn how to operate with certain techniques with different people.

M: Comedians can be pretty cynical, even nihilistic. But on your show, you don’t seem to have a dark cloud over your head like a lot of comedian pals of mine have off-stage. Your curiosity comes from a fairly positive, almost optimistic point of view. Can you explain that at all or am I misreading?

K: Well no, I think it’s funny. I think if you talk to my wife she might have something to say about the dark cloud.

M: Can you put her on the phone real quick?

K: [laughs] You want that exclusive interview? She’s not here otherwise she’d grab the phone but yeah. Comedy is a way of processing the darkness and so I feel like some comedians use the darkness as a part of the comedy.  I talk about  Black Lives Matter and things that are pretty dark and — not that Black Lives Matter is dark — but police brutality is dark.I feel like my job is talking about how to make jokes around that stuff that you help sort bring some light to that situation. But by the time I step on stage, if I don’t have clarity on it I’m probably not going to talk about those topics. I’m still gonna wrestle the darkness. But I would describe myself as amongst my friends as pretty cynical but once I get on stage like I think that like I wouldn’t of had two kids if I wasn’t optimistic about the state of options, about where things can get to in my lifetime. I also know that it takes a lot of work.

M: It’s a bit cliché but we live in a very siloed, balkanized, and divided America. What have you learned since having started doing this show?

K: I mean we’re divided because we divide ourselves a lot of the time. I travelled a lot, what I find is that everybody for the most part, everybody likes their corner of America more than they like other corners of America, which is why they live there or why they haven’t fought their way to get out of there. So on some level this is home and a lot of times what people do is they look at other parts of America and go, “I don’t know why they do that,” instead of going, “that’s their home.” So we sort of want to defend our turf and in doing that, you want to sort of put down the turf below people.

You travel through the South and people outside of the South make fun of the South. Well people from Alabama make fun of Mississippi specifically. You know what I mean? And people in Mississippi that make fun of a town that is one town over from them. So everyone sort of wants to defend their turf which is sort of part of the animalistic nature from which we evolved but the thing that once you sort of get passed all that sort thing that we do. Siloism. What we do to ourselves. Everybody’s thinking about the same stuff and that’s the thing. I think that if we can get out of the whole left-right, sort of pro wrestling, sort of way of describing politics. That’s what we all want. Better schools for our kids, better roads in our community, better insurance, better healthcare, let’s put it clear like that. Better jobs, we want to make more money. All that stuff is the same. What has happened is we’ve allowed the people who run policies in this country to sort of make us pick left and the right as if those are the only two choices.