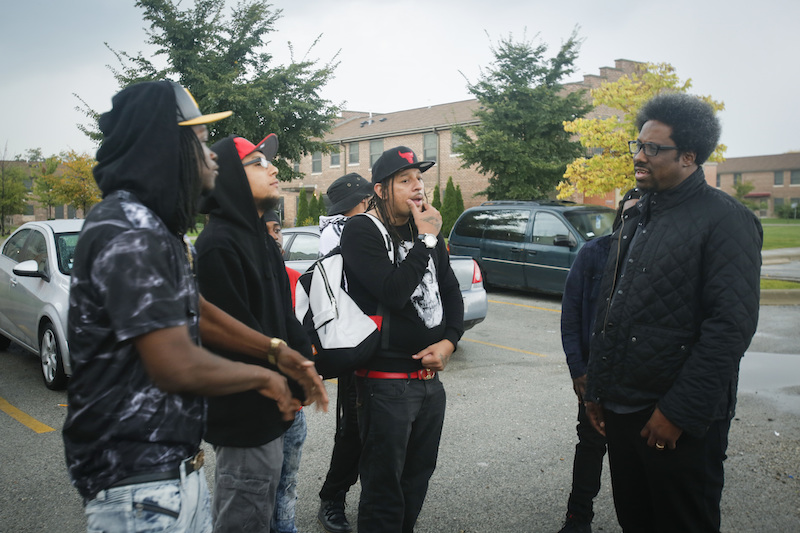 M: Nearly every cable news outlet is filled with panel shows that sell a lot of soap based on that very sort of right-left divide. Is it weird for you to call that out but at the same time share time on CNN? I don’t mean for you to sell out CNN…

K: Well we know that’s not going to happen, sir.

M: But we’re all news junkies now because we live in this sort of fascinating time, and much of cable news program is designed around this Crossfire model. You turn on CNN and you can’t help but see a lot of the “pro wrestling” left-right divide type programming you just decried.

K: Certainly all across TV we know conflict sells. So even with my show the commercials sort of show the most conflicted moments on the show. That’s just the nature of all entertainment. Conflict sells. Now having said that, I know that I don’t do well on those panel shows in the boxes. I think they tried to do that with me initially when I got to CNN and I complained “Why is everybody yelling?”

So I feel privileged at the fact that I get to do it my way. I wouldn’t do well that way but I look at somebody like Apryl Ryan who she knows how to do that, and she knows how to clarify in custody. I think everybody has a place where they can use their skills. I’m just glad that I don’t have to find my skills in this box. Yeah I mean would I like to if I was in a meeting and they said you know you can decide the next time Jeffery Lord comes on air, I’d be like, “thank you.” Would I like to be in charge of these appearances? Yes, but am I happy when I see Apryl Ryan in those boxes next to him? Yes.

M: I I’ve heard you say a couple times mentioning Anthony Bourdain. He definitely seems to be your spirit animal or sort progenitor of the form. Are you taking the “Bourdain approach” towards American culture?

K: Yeah, I think that I think that’s fair. I’m very aware of who my influences are, who are the people in my industry that I need to be paying attention to and the people who inspire me, so as much as people sort of think I emerged two years ago from the CNN you know whatever where they make new CNN people, like I was a dude ten years ago on his couch sitting with his girlfriend and going like, “man, I like this Bourdain show on the Travel channel.” You know what I mean? That’s the guy I’ve been following for a long time and like man, it’d be great to do a show like this. Like in the same way I was doing that with stand-up, this Chris Rock guy and eventually I got to work with him. What he is doing is he sort of is sneaking in these conversations people didn’t expect when they turned on a show about food and I think that it’s the exact thing of this where when we make the show we go what can we put in the show that people aren’t expecting.

M: The most shocking images that we’ve seen — and maybe the most newsworthy — was the series premier you which featured you at KKK rally where they burned a cross. Now here’s a group that founded on hate and ignorance, and while it was really brave of you and made for great TV, but do you regret providing such enormously powerful platform to a group that may have been better left ignored?

K: The only regrets I have is that I don’t do a better job sort of making clear what I’m doing. Like, I don’t ever have regrets of the content, sometimes it’s like oh yeah, we could have actually made that a little clearer as to why we are sticking those two things together. But I don’t know. Just here’s the thing I’m sort of set on right because I heard the same thing about Richard Spencer talking to him. This is ignoring things, that’s what makes them better.

I don’t know of a time in your life where you go, “I’ll just ignore that and it just gets better,” that’s where I come from, especially as a black person from this country. From the history from the history of the civil rights movement you know from Harriet Tubman era through Black Lives Matter era with Alicia Garza, and Patrisse Cullors, a like it’s about confronting the thing and not just showing up and looking it in the face and now, I’m not comparing myself to any of those people I just mentioned cause those are people that do the hard work but as a comedian I’m going, I know people who watch this show who would never think to go let’s put on a 45 minute documentary about the clan on CNN. There are people who aren’t going to watch that. They’ll go “a black guys gonna talk about the clan?” And what I hear about all these things, as much as I hear people going, “why would you talk to that person?” or “why would you give that person the platform, why would you normalize? Blah, blah, blah,” I hear from way more people going, “oh my God, I had no idea that still existed, I can’t believe that this is America,” and those people go to work the next day and have conversation they wouldn’t of had.

M: You feel that the benefit of bringing sunlight to that subculture, is sort of way more important than any critique you may find from your community?

K: I’m open to critiques. I hear all them all the time and there are critiques, but I have to ask myself all the time, do I stand by this? And overwhelming the answer is yes.