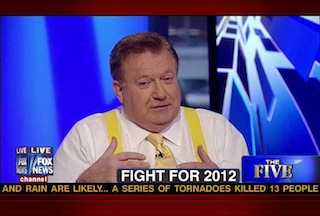 Last summer, Fox News had a pretty big hole to fill in their now Glenn Beck-less 5 o’clock hour. When they decided to put on an opinion panel show inspired in part by The View, no one knew if it would work. Even the hosts had their doubts. However, sure enough, the show became a big ratings winner for the network. And, ever since the premiere, one of the most attention (and headline) grabbing aspects has been the resident “crazy uncle” to the show’s family of hosts, Bob Beckel, who was nice enough to talk to Mediaite about how the show was created and why it works.

Beckel, who’s worked on campaigns for the likes of such Democratic luminaries as Robert Kennedy and was a member of the Carter Administration, is The Five‘s token liberal. However, being outnumbered doesn’t seem to have dampened his enjoyment of the job. We caught him as he was getting ready for Friday’s show (with his birthday poem for co-host Eric Bolling), and he talked to us about how he ended up at Fox News, why he never wants to hear the name Kim Kardashian again, and why Greg Gutfeld can make you feel like you’re having an acid flashback.

Alright, feel free to stop me if you answered this a million times, but how does the guy who has worked on some of the most famous Democratic campaigns of the past 50 years end up at Fox News? What’s the story?

Well, it was pretty simple. It was because I’d known Roger Ailes for a long time. He and I were in the campaign business together. He was getting out as I was getting in but we ran across each other and I had done CBS and CNN and I had a call from Fox and I took a look at their numbers and said, “Ya know, they’re reaching a lot of people.” I’ll tell you, I took some heat for it, but I decided, being a former campaign guy, if you have the chance to get on the side of voters, as many as you can, you oughtta take advantage of it. And Fox was the place to do it.

I mean, yeah, some people said, “You’re going into the belly of the beast,” but the fact of the matter is that this audience is so broad now that it includes a substantial number of Democrats, most of them moderate Democrats, but persuadable voters in this group. I can talk to more persuadable voters in a week on The Five than I could at CNN in a year, so it’s worked out fine. I mean, I take a little heat from the left and I certainly take a lot of heat from the right, but I’m so used to that now. I got thick skin, so that’s ok.

Speaking of that, how do the Five fans treat you? You guys are always asking for emails. Are they friendly?

Yeah, you know, if I had a buck for everybody that said to me – and the answer before I say that is, we get an enormous amount of mail, both emails and regular mail. But, if I had a dollar for everybody who said, “Bob, I like you but I dont agree with a single thing you say,” I’d be able to retire now. I get a lot of that from conservatives and there are liberals who get in touch with me and say, “Thanks for putting up a good fight,” and there are just the loudmouth people who cant stand me, you know. And they start off with saying, “You big fat commie,” and then they go into whatever it is that they want to say. And I’m inclined to email them back and say, “Thank you for your kind words. Was it your mother who married your brother or your father who married your sister?” But I decided I wouldn’t do that in the interest of fair play.

We get an enormous amount of mail, both emails and regular mail. But, if I had a dollar for everybody who said, “Bob, I like you but I dont agree with a single thing you say,” I’d be able to retire now.

But you know, I would say, I’m surprised. I’ve been at Fox News for six years now and this is the first sustained gig I’ve had here. But I’ve been surprised at how receptive the Five audience has been. They’re not really as partisan as people might think. It’s kind of like they’re watching a family coming together, arguing about things, and, yes, at politics I’m usually outnumbered four to one, but there’s other things that we split down the middle on, and it seems to be working in a way that frankly surprised all us. It certainly surprised me. Because, you know, I used to buy time for TV ads that I would put together for campaigns. I did well over 100 campaigns and we would never buy the 5 to 6 o’ clock hour. We might buy the 6 o’clock news adjacencies, but that was about it because it was known as a dead hour. The people were on the road, coming home, or going out to soccer games or whatever, so it was always a time slot that you’d think that you wouldn’t get much of an audience.

Beck had a good audience, but I would venture to say that it’s slightly different than ours. And I think that people have been very surprised at how well it’s done.