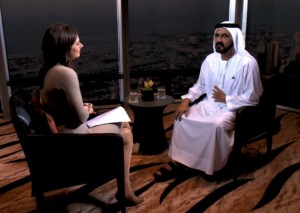 When you see Erin Burnett‘s 7 p.m. show Monday night, know that she’s putting a little more effort into this particular program — she’s broadcasting live from the United Arab Emirates, where it will be 4 a.m. local time. The show will feature interviews with UAE prime minister Sheikh Mohammed bin Rashid Al Maktoum and a protester who was just released from jail after an eight-month term. Burnett also visited a police symposium that addressed terrorism and how to coordinate Middle East police departments in dealing with it. In the midst of preparing for a show halfway across the globe, Burnett graciously took some time out from her show prep to talk about the fun associated with world travel, the excitement of not sleeping for three days, and her plans on adding to her extensive miniature camel collection.

On the logistics of getting to UAE: We did the show on Friday out of New York, then went straight to the airport and flew out. We got here Saturday night, met with some sources, then we spent Sunday shooting, and we spent all day today shooting and working and writing the show all night. And then we’ll do the show. We’ve had about five hours of sleep in three days.

On reaction to her Occupy Wall Street “Seriously” segment, and if she regrets it: I reported what I saw. I stand behind everything we do. What I found out is people get really riled up about all kinds of things we’ve done — there’s that one, but there are other things, too. The way I see it is that’s a sign that — for lack of a better word — proof, that we picked the right name for the show That’s what being out front is about.

On getting tired from the travel, or if it energizes her: Its like a high. I love being in the field, I can’t tell you how much I love it. I live for it. Kind of right before you go, you get excited, but you also dread it. Because you’re like, ‘Oh my God, I’m not going to sleep, I don’t think I can do it.’ That’s the way it always goes, because you don’t have much time. You want to monetize every second of it. When you get back you don’t want to say, ‘Oh, I could have done that or could have grabbed that or met with this person.’ So you just get there and you go and it’s pretty much on adrenaline.

On the size of this camel collection: More than any human being needs. It’s pretty big, and you want to know what the terrifying thing is? It’s growing exponentially, because people know that I like them, so I get gifted them as well.

NEXT>>>> Burnett on the differences between CNBC and CNN. Plus, what she’ll be drinking on the flight back to New York…