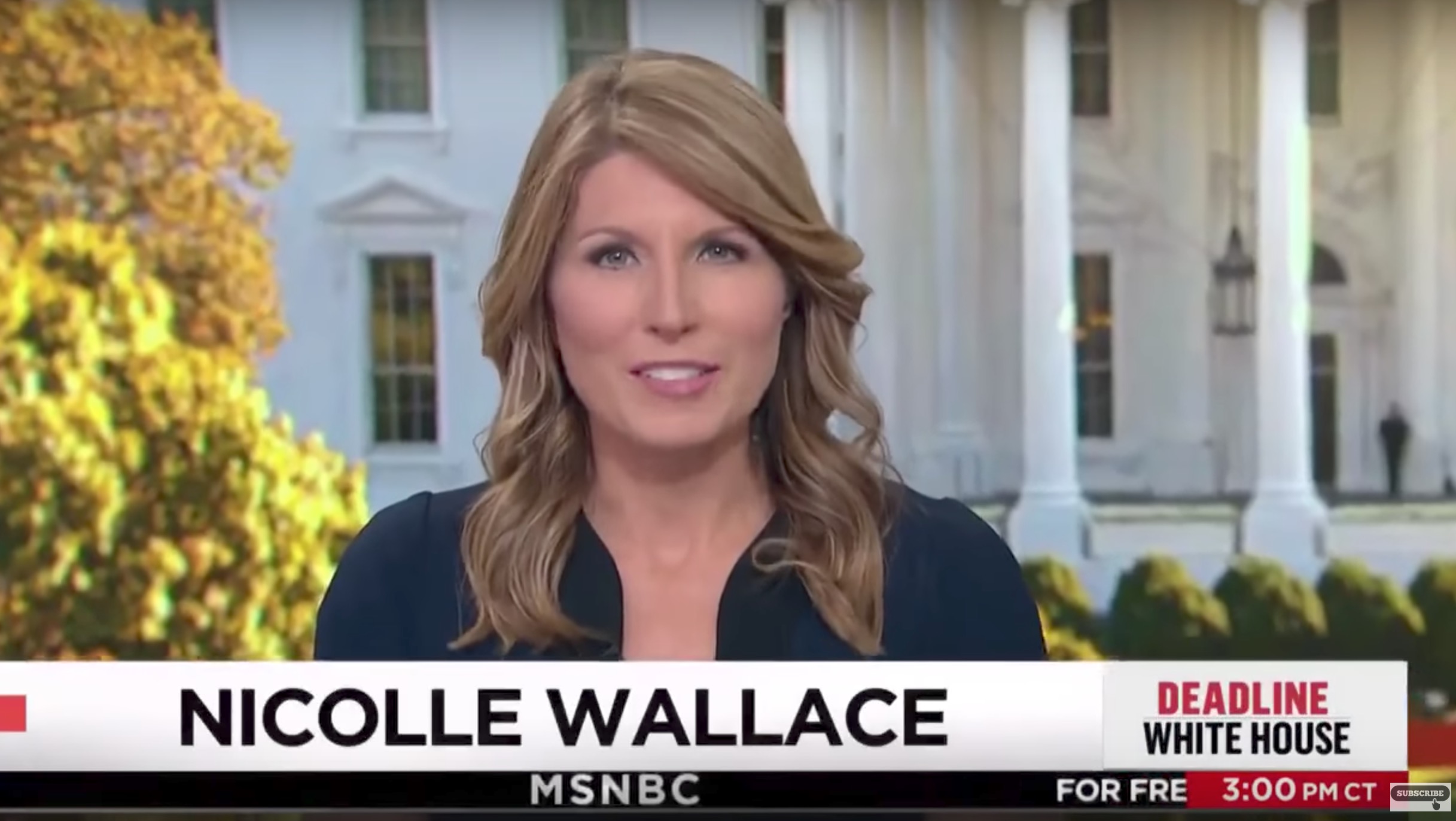 For years a ubiquitous presence on NBC News as a political analyst, Nicolle Wallace debuted her own MSNBC show in May, four months into President Donald Trump’s tempestuous administration.

Deadline: White House, her first full-time hosting gig for MSNBC, is a smart political-panel show that airs in the hours after the White House press briefing, now conducted by Sarah Huckabee Sanders. That timing is fitting, given what makes Wallace’s insights on the current administration particularly valuable: a longtime Republican, she was once communications chief for George W. Bush and a senior adviser to Sen. John McCain’s 2008 presidential bid.

And that brings us to the question of Wallace’s party affiliation. Though a deep-red member of the Republican party, she has been forcefully opposed to Donald Trump since he descended the golden escalator in 2015 to kick off last year’s presidential campaign. Her perspective as a conservative in mourning — paired with sharp political analysis — make for a compelling 4 p.m. hour.

I spoke to Wallace on Monday evening — after the controversy surrounding Trump’s feud with a Gold Star widow raged into another day, but the night before two prominent Republican lawmakers dropped bombs on their own party — about how cable news can cover politics in the age of Trump, how newly-anointed WH comms director Hope Hicks is handling her unruly boss, and whether Wallace still refuses to talk politics with her parents.

This interview has been edited for brevity and clarity.

What do you see to be the challenges for your show, and cable news more broadly, in covering the Trump White House?

You know in terms of White Houses — it’s relatively easy to cover this White House, for a variety of reasons. Because of one, the turnover, two, the chaos, and three, the president is not an insular guy. He’s got a wide group of people who he’s in contact with. Between members of Congress, people who are part of political circles, and people who work there, it’s not hard to fill in the blanks. The other part that makes it easy is that there’s no inner monologue and outer monologue. Trump is who we see and who we read on Twitter — that’s really Trump. And so covering him is more of an understanding of the scripted moments: what goes into a teleprompter speech after the Charlottesville debacle, a speech that riled the country for six days? What makes it so interesting is covering the rollercoaster that he seems to love taking the country on. I mean we’re on day eight of this tragic story now of his tussle with anyone that will tussle with him — including the widow of a soldier. I heard from three White House sources over the weekend who said morale is as low as it was after Charlottesville. It’s a really difficult, unsustainable dynamic internally. They say: “We keep hoping everyday that we can get on message, that we can focus his tweets and his comments on something that’s part of the agenda, like tax reform.”

As someone who covers cable news and the political circus daily, it can be easy to get news fatigue from the constant deluge of breaking stories under this White House. How do you deal with covering that?

What we do is we try to give everything its proper name. So when [Trump’s] waving shiny objects, we call them shiny objects on TV. When he’s reading from a teleprompter speech, we know it’s not what he feels so we usually wait for him to get back on the plane and tweet his real thoughts about a topic. There’s a million different things happening but there’s one common theme. And that’s the president’s character, the president’s temperament, and the way the president is doing his job in a manner that’s never been done before.

You were communications director under President George W Bush. How do you think Hope Hicks is doing in that role for Trump?

I’m not the judge or jury. I try to just stay laser-focused on [Trump] the person who stepped into the arena. And the people who went in there with him, I’m sure they all have their reasons for being there. They think that they can make it better, that they can make him better. There’s no evidence that he is even aware of what a communications director does in any organization, company, on a campaign, or in a White House. There’s no evidence to me of [Hope Hicks’] effort — but that’s not to say she’s not brilliant and wonderful. But there’s no outward facing output that indicates someone is driving a message, ever.

Yeah. And if the White House had a message [Monday] it’s unclear to me what it was. [Trump] watched the Good Morning America interview with the widow of a young service member, and tweeted, essentially, “She’s not telling the truth, I knew his name the whole time.” So he rapidly responded to a grieving widow. If [Hicks] had a strategy, I don’t want to say it was a bad one, but he obviously didn’t adhere to it.

But you know, I also learned working for Republican presidents that you wage a campaign in the media climate in which you find yourself. So I always think about the other side — but when we worked for Bush in ’04, we never sat around and talked about how the media was against us. We just figured out how to do well, how to do better than the opponent. I just don’t remember ever sitting around and harping on the media climate.

A few months ago you suggested Fox News isn’t much different from state run media in how it parrots the White House line. Could you elaborate on that a little bit more?

Listen, I wouldn’t paint any network with a broad brush, in the same way that I wouldn’t want ours painted with a broad brush. But there are certain hours on Fox News, and I’m not going to keep it a secret — because look at the programs that Trump engages in personally, that he tweets about — that are very much in service of the president’s agenda. I have a lot of friends at Fox, and I have friends on both sides of the Trump question at Fox. I know that during the campaign it was really uncomfortable for a lot of them that were on the other side of the Trump question. But again, they make their choices. It does put Fox in the middle of the complications about how media is different in the time of Trump, in that by ignoring some of the most outrageous things that he does — they make choices against things that are worthy of asking questions about.

I want to ask you about George W. Bush’s speech assailing nativism and bigotry from last week. Did you see that as a direct rebuke of, at least, Trumpism?

Of Trump-ism, sure. I take [Bush aides] at their word, they said it wasn’t a personal attack against Donald Trump. But it was certainly acknowledged to me that he understood how it would be received in the current political climate. And I’m really proud to have worked for someone who stood up to all of the things that have been lost in the time of Trump. You know, this idea that we don’t have a leader who speaks clearly about race. We haven’t had that in a very long time. We now have someone who after the violence in Charlottesville said there were very fine people on both sides. When you don’t have moral clarity on the question of the KKK and white supremacy, as George W. Bush said, bigotry is emboldened. I guess I didn’t realize until he gave that speech what a leadership vacuum existed. And I was so happy to see Bush 43 and to see Obama on the same day. It just gave the disagreements we used to have about policy seem so small, compared to the more fundamental disagreements we have now about whether someone is competent to serve.

I saw in an interview with New York Times Magazine you said your parents are Trump supporters, and you don’t tend to talk politics with them anymore. Is that still the case?

They are die-hard Trump backers. I talk to my parents all the time, and sometimes it requires a really artful dodge. You know they said to me at some point last week, “isn’t General Kelly amazing,” and I said “yes.” And then just moved right on, I didn’t think they were in any state of mind to hear the rest of the sentence, which is — “yes but he shouldn’t have attacked Congresswoman Wilson.” So we do not debate. And it’s very instructive, because I think it’s near impossible to program to both sides of the Trump question. And I know this from my own life: there is no political conversation that I can have with my parents that won’t end in terrible disagreement. Me thinking they’re crazy for supporting him, them thinking that I’m crazy and part of the lame-stream, fake news media. And so I do a couple things. I make sure that I have all my facts, because even if I’m 100% right and one day get one thing wrong, people that are Trump voters will hold that against me forever.

As a host at MSNBC we have the time and the support from our bosses to be really careful. So there’s a silver lining to not talking to my parents about politics — I understand that I have to be right 100% of the time so I don’t become some exhibit in their minds of what Donald Trump smears as fake news. And I understand the depths of what Trump supporters will go to excuse everything that he does. And so it doesn’t boggle my mind that his supporters are still with him. They’re going to be with him until the very end, whether that’s four years from now or eight years from now or from some intervening event.

Do you see a breaking point at all? A norm Trump could violate that would finally make his base flee?

I don’t, and here’s why: because we don’t have enough agreed-to facts anymore. He basically did that last week by violating norms of how you respond to someone suffering from a military loss, a Gold Star widow. So there are just not enough sacred things left for him to destroy, and just not enough facts that people can agree upon. I think his supporters will be with him until the end. So I think the better question is: what can you get done with 32%? And I think with this White House, it’s not very much. You can’t push a legislative agenda through with 32%, your candidate doesn’t win in special elections in Alabama with 32%, you don’t like a lot of your press coverage with 32%, you can’t get the Republican leaders in the House and the Senate to yield to your will at 32%. So you can’t get very much done, but it looks like you probably keep your base.